Math is a musician’s friend! 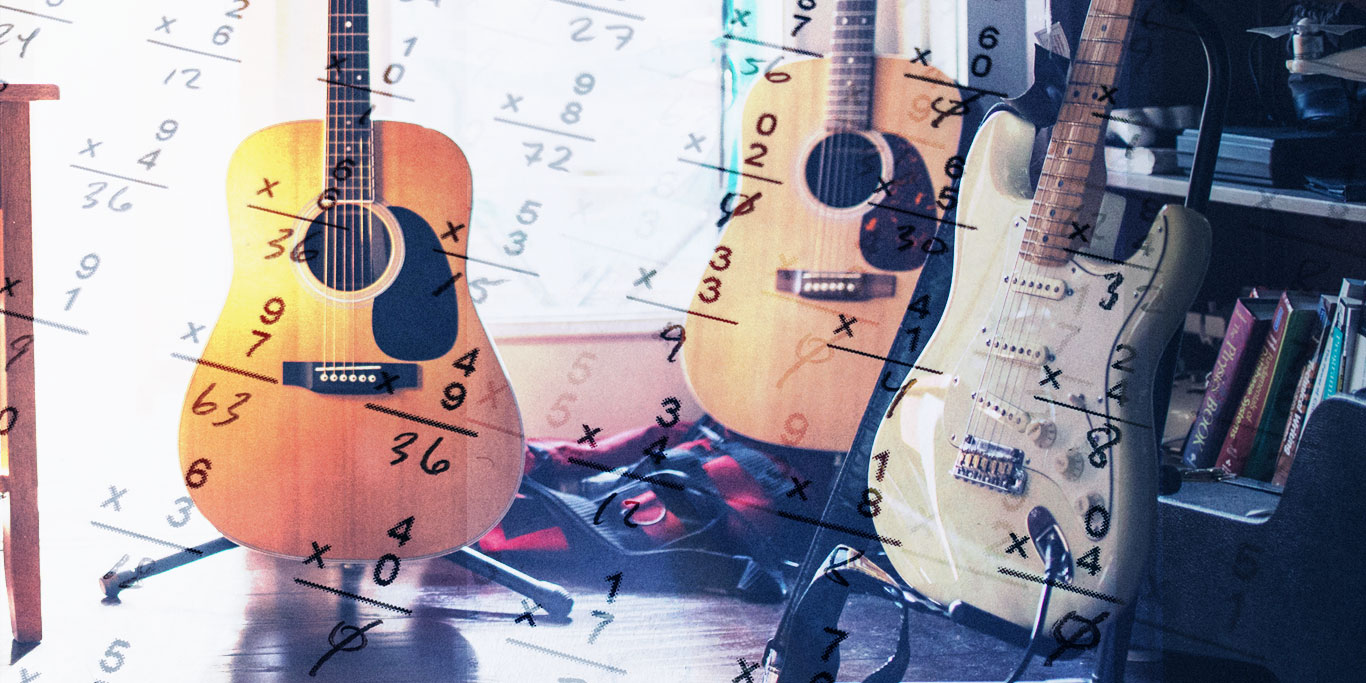 Well, math should be a musician’s best friend. Unfortunately, like many people, some musicians are afraid of math. This fear ends NOW… or at least at the end of this article. Get excited.

“Knowing math, much like knowing literally ANYthing else, is empowering. The truth is that making a career out of music is just as much about the business as it is about the art itself. And being business savvy involves a degree of math, period,” says Vanessa Vakharia, Founder/CEO of The Math Guru, who is also a founding member of Goodnight, Sunrise, an indie rock band from Toronto.

Numbers are everywhere in music, both on the creative side of musical creation, and on the business side.

“We have this whole obsession with categorizing. We're obsessed with the idea that there's such a thing as an "artsy" person and conversely a "math" person, and that the two are rarely able to co-exist. But that's all BS. We're all just people, capable of learning and mastering absolutely anything. A successful musician doesn't need to be able to solve quadratic equations. But entering the music business (yes, business!) with an attitude that math is to be feared, simply makes no sense!” exclaims Vanessa.

When Vanessa and her band Goodnight, Sunrise got the opportunity to open for Bon Jovi at Air Canada Centre, I worked with Vanessa and her bandmate Dave Kochberg to calculate the SOCAN royalties that would be paid to them for opening the show. Those are the kinds of numbers you want to be adding!

“Math is used in calculating SOCAN royalties, in deciding whether to fly out West to tour or to rent a camper van, in deciding which shows to take and which to say no to, in deciding how much to invest in recordings... the list goes on. Many musicians have been labelled "creatives" early on and as a result think that they can't "do" math. But the truth is, all that's required to really understand the industry is simple, basic math - and any indie artist can do that!” confirms Vanessa.

Vanessa started the list and here are more examples:

Paying 15% to someone, from a manager to a publishing administrator, has more meaning when you know which revenue sources should be added and are then multiplied by 15%.

If you’re a producer and are being asked that your fees be recoupable, do the math to see how much music sales and licenses must be generated before you start to get paid, if 0%, 50% or 100% of your fee is recoupable. You can then use this information to negotiate a more reasonable set of terms.

If you’re an artist and the producer that you’re engaging wants to get paid half up front and half upon delivery, calculate your cash flow to ensure you have the ability to pay.

If you need to stagger the payments to ensure you have the cash, propose something reasonable that’s consistent with your ability to pay the producer. Consider all your revenues and expenses, including when you get paid, and when other payments (including rent) are due.

If you’ve been promised reports from your distributor or publisher every six months, for example, plan your payment commitments to others accordingly.

Try to reduce the time in between reports. If you get a report every month, you’re in a much better spot from a cash flow perspective once payments become steady.

Let’s say you engaged an artist to be a featured artist on your recording. You agreed that she’s entitled to a percentage of your master royalties, and she wants an advance. If you want to give her an advance, you can calculate what you think she will realistically receive and ensure that the advance you provide her isn’t more than the royalties you plan to pay her over time.

On the flip side, if a label is confident you will reach certain sales, you can calculate how those sales should translate into royalties for you in order to comment on whether the advance provided is enough.

If you are entering into a record label deal, and the label offers you the opportunity to buy physical albums for a certain dollar value, related mathematical questions include: how much money the label is spending on the album pressing, whether the difference between what you pay the label and the label’s costs go to reduce your financial debt to the label, and what price you would otherwise be able to get if you were to order CDs or vinyl on your own.

Staying on this record label mathematical rant; suppose the label says that compositions you write and control (Controlled Compositions) will earn you a mechanical royalty that is 75% of what they should be paying you.

Does your producer want 15% of the featured performer royalties paid by SoundExchange? Consider how this will impact the percentages expected by everyone else in the band.

How much money can you save by selling music, merch, and tickets directly to fans on your own website instead of paying commission to others? You can also decide to share some of that savings with your fans by reducing fees by what you would otherwise pay in commission.

I got excited about this one. In many music agreements, from management agreements to distribution agreements, there are timelines that can get extended automatically if either party does not terminate the agreement within a certain amount of time of when the agreement’s term would otherwise end. Count the days correctly! Always give a notice well in advance of the deadline just in case.

If you wait until what you think is the last minute, you may have the days counted incorrectly. Are we counting days or business days? When negotiating these timelines, it’s preferable to have the right to end a term close to when the term would end, as opposed to being required to give notice upwards of 90 days before the end of the term.

Does it make sense to give a publishing administrator 15% of all your global publishing royalties? Take a look at what you are getting on your own in Canada, and what you are leaving on the table outside of Canada.

Use percentage and dollar value caps to limit what other people can spend if you’re going to be responsible for those fees. This is a relevant consideration for management, publishing, label and other agreements.