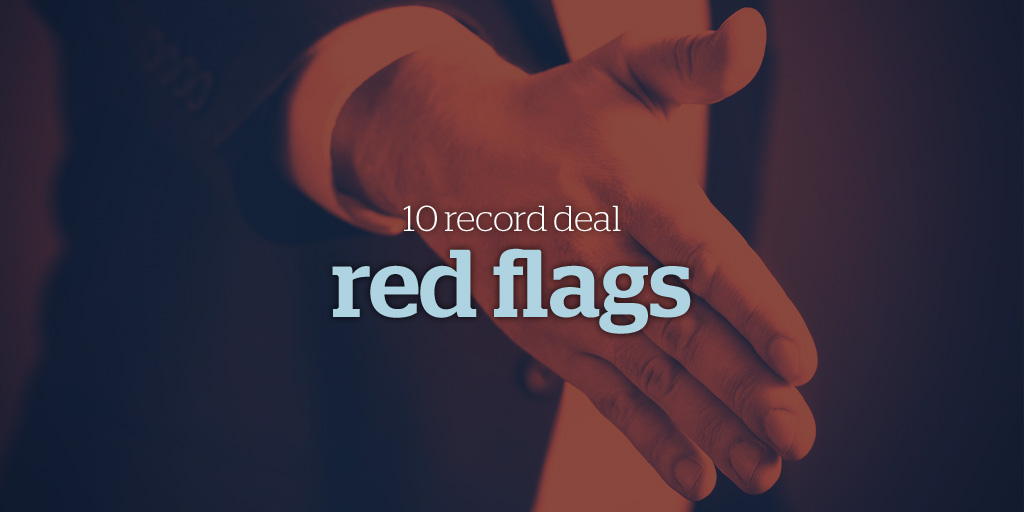 When a band receives their first record deal, there’s a sense of accomplishment. Someone likes me! Where do I sign?

Before signing a contract with a label, it’s important to understand what you’re signing.

When I’m reviewing a record label agreement for an artist, it’s not uncommon for there to be a number of “red flags” – warnings to watch out for in the agreement and/or the relationship with the label.

The following list (in no particular order) provides some common red flags to keep in mind.

1. Inconsistencies between what you are told and what’s in the contract

It may be on purpose, or not, but just because the A&R gal at the label told you one thing, doesn’t mean the record deal you’re asked to sign is completely consistent.

2. Being asked to give more rights than are needed

The role of synch licensing, which is one element of music publishing, includes the role of placing music in films, TV series, and advertising. Getting placed can be very lucrative for whoever owns and controls (1) the master recordings (by providing a master use license for the sound recording) and (2) the publishing rights in the compositions (music and lyrics) (by providing a synchronization license for the composition).

Other music publisher roles include administering licenses and the collection of publishing royalties.

Unless you’re being appropriately compensated for the publishing rights, and the label is the right fit to be both your distributor and your publisher, then the requirement to grant publishing rights to your label is likely excessive.

If you read that the label wants publishing rights, ask what they intend to do with these rights and how you’re being compensated.

Also, is the label asking to own your masters? This isn’t needed to distribute your music if you give the label a sufficient license to distribute your masters. If the label owns your masters, they get a piece of the broad publishing-related revenue, specifically being fees paid for the master use license, which is typically 50% of the up front fees to place music (into a film, series, ad, game, etc.), with the other half being paid for the synchronization license to the publisher(s). Also, whoever owns the masters, controls the use of those masters, including for synch licensing opportunities.

The label may promise you an upfront cash advance (against future sales) if they decide to extend their rights – which is referred to as exercising their option(s), but are you automatically entitled to get an advance? The label may have written the agreement in such a way that based on prior sales, they can access those additional rights by paying you a lower advance than the number in the agreement, or no advance at all.

If you’re both a writer and performer, a label will usually try to force you to receive fewer mechanical royalties as compared to the standard royalty rate.

For example, you may be required to accept 75% of the mechanical royalties for up to 10 songs, even if you need to deliver 13 songs. While this is not an uncommon (yet unreasonable) request, consider how much you’re paying in mechanical licenses to your co-writers and the people who wrote songs you covered. Are you paying more mechanical royalties than you’re receiving? That would be a very bad situation!

7. Not getting it in writing

What do you want the label to do? Spend some money on marketing and promotion? If they aren’t willing to put their verbal commitment in writing, maybe the label isn’t going to do what they verbally promised.

8. No provision to get details

The label is responsible to pay you. As such, they should also have an obligation to give you details about how they calculated your payment. Also, you should have the ability to make sure the numbers are accurate by having the right to take a look at the label’s records (referred to as an audit).

There are a variety of “general” agreement terms, from representations to indemnity, which are found in all types of agreements including record label agreements. Just because they’re commonplace, doesn’t mean the terms you’re reading were drafted reasonably. Many “standard” terms can be written favourably for one party or the other.

If there isn’t a clear way for you to get out of the contract, you will wish you had a way out, including if the label isn’t paying you what you are entitled to receive, but are still selling your music.

Also, if you’re told a label agreement is take it or leave it, and the label won’t answer your questions about the agreement, they may not be the most trusted partner.

On a brighter note, if you read a record label agreement before signing, get some assistance from fellow musicians and/or a music lawyer, and the label is willing to discuss and reasonably negotiate the agreement, it may be the start of a beautiful relationship…

Also check out: Major vs. Indie: What really happens when you sign a record deal

Posted by Ari Herstand
This is not accurate. "If the label owns your masters, they get a piece of publishing revenue" is not true. They get a piece of synch licensing revenue which is actually called "master use license" but it falls in the synch licensing category. This guy is confusing "publishing" with "synch licensing." These are not equivalent. And there's a lot more that goes into publishing than just synch. Synch is just one small aspect of publishing. Publishing companies administer licenses and collect publishing royalties (mechanical, performance and synch) If someone wants to license a song for synch purposes (TV, film, ad, video game, etc) they must get a Master Use license (for the sound recording / the master) from the label AND they must get a Synch License (for the composition) from the publisher. Totally separate. If an artist has a label AND a publisher, the music supervisor must go to each party separately. Yes, typically the up front synch fee is split 50/50 master use/synch license (label/publisher), but again, "If a label owns your masters, they get a piece of publishing revenue)" is completely false. If a label owns your publishing, they get a piece of publishing revenue. Lots of labels own masters and do not see a penny of publishing revenue. Labels that own masters actually have to PAY publishers the mechanical royalties for every song sold (in the US) - elsewhere in the world the collections agencies handle this and keep the label out of it. Synch does not equal Publishing. Masters do not equal compositions. This attorney does not seem to have a solid handle on music law or the terms of the music business.

Posted by Dave Cool
Thanks for your feedback Ari. I forwarded your concerns to Byron (who's a fan of your work), and he sent over a few small revisions which add info to address your comments. The post has been updated accordingly. Cheers!

Posted by Mariella
So who is Ari Herstand?

Posted by Newman
This is so helpful. Thank you so much.

Posted by <a href="http://superstupidfresh.com/product/customized-tee-shirts/">http://superstupidfresh.com/product/customized-tee-shirts/</a>
Labels that own masters actually have to PAY publishers the mechanical royalties for every song sold (in the US) - elsewhere in the world the collections agencies handle this and keep the label out of it. Synch does not equal Publishing.