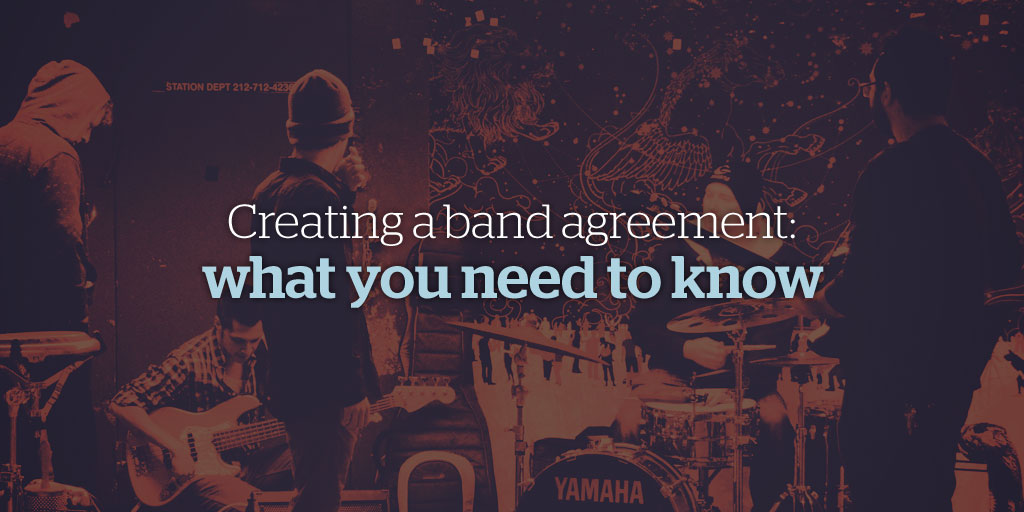 Being a musician is a business. If you’re in band, one of the most important elements of organizing your business, is having an effective band agreement.

Without agreement among the members of your band, whether verbal, written on a napkin (is that still done?), texted, or written by an entertainment lawyer (shameless plug), some key issues will need to be negotiated at a time when perhaps not everyone is acting reasonably. Or you may need to rely on the law, which may not provide appropriate solutions for your situation.

Depending on where your band is geographically based, there is likely law of your province or state governing partnerships, whether the partnership is four people in a band, or three people who run a social media marketing company. If your band isn’t incorporated, depending on your location, it may be deemed a partnership by law.

That law may provide, for example, that any of the partners can make binding obligations on behalf of the band, that all partners are responsible for the band’s obligations, and each partner is entitled to share equally in the capital and profits of the business. This may not be what you want, but an agreement among the band members, overrides the law (at least in Ontario, Canada).

Preferably, instead of relying on the partnership law, the band will have a meaningful conversation about key issues early on. Why? It’s easier to talk about the division of money when there isn’t any. Why talk about how to kick someone out when you’re not on speaking terms? It’s better to have a process before the mad former member uses her leverage to get more than she would have otherwise received under a reasonable band agreement.

The following are some questions your band should consider discussing. Blame me for bringing it up.

Make some decisions, and if you want help formalizing the agreement, contact an entertainment lawyer in your state or province.

Responsibilities of the Band Members

Are the following decisions made by majority, unanimous agreement or otherwise? Does anyone have more votes than anyone else? What’s the plan if a decision is to be made by majority but there are an even number of band members able to vote?

The potential of making a lot of money and/or wanting to add someone or kick someone out may end up killing your band if the awkward conversations about money didn’t happen proactively. Don’t become a band horror story. Instead, have the conversation, focus on the music, and enjoy a successful career.