How to Get a Wikipedia Page for Your Band 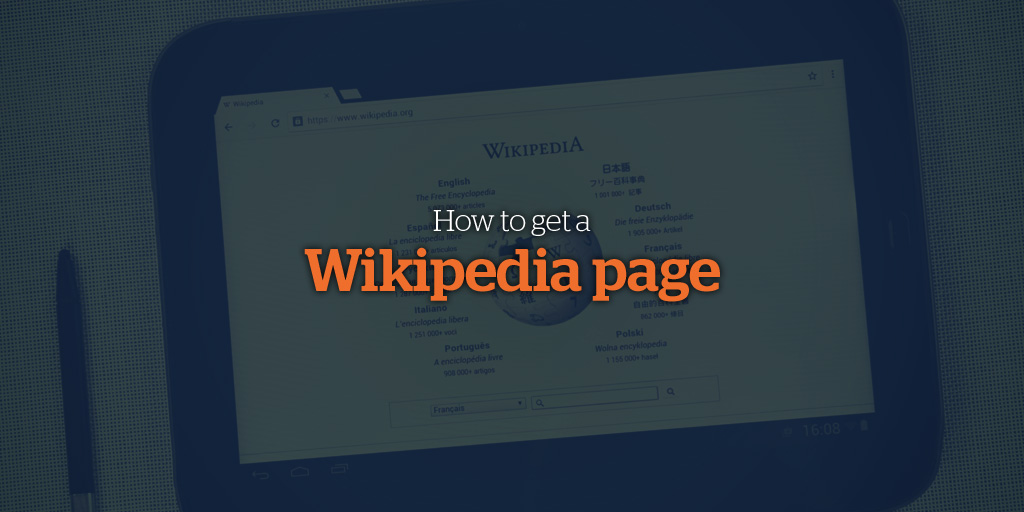 Bandzoogle just implemented Google’s new Knowledge Graph format that allows our members to get their upcoming shows listed on the main search page when a fan does a Google search for them.

Though we provide the information to Google, we're not in control of who they add to the listing. In their documentation, Google suggests that having a Wikipedia page will increase the chances of being listed.

Now, getting a page on Wikipedia isn't a straightforward process, and there's no guarantee of being able to get one. But if you follow their guidelines, you'll give yourself a very good chance.

Here are the most important things to keep in mind when trying to setup a page for your band or music on Wikipedia:

The page must be neutral

Wikipedia stresses that the article or page must be from a neutral point of view. So although writing the page entry yourself might be the quickest way to get onto Wikipedia, chances are that it will get deleted very quickly for not being neutral.

A Wikipedia article is not meant to be a promotional page for your band, but an unbiased documentation of your band's music and career. So it would be best to find someone who already contributes to Wikipedia to write the entry instead. This could very well be a fan or friend of the band, but make sure it’s not an obvious conflict of interest, which Wikipedia also frowns upon.

Information must be verifiable

Information about your band or music must come from a verifiable source. So even if the information is factually true, Wikipedia insists that it must be verifiable before you can add it to the page.

Information must come from reliable sources

The next thing to keep in mind is that for any articles or sources that are cited on your Wikipedia page, they must come from reliable, independent, 3rd party sources. So it’s better if the author cites an article in the media, rather than the band's website, or something the singer's mom said on her personal blog.

Your band/music must be "notable"

This might be the most important point: your band or music must be notable in some way. Meeting Wikipedia's notability requirements might be the difference in your page getting deleted or not.

Being "notable" is subjective, but here are some criteria that Wikipedia specifically mentions would help a band to be considered notable:

Other things that may help you to be considered notable:

The more information with reliable sources that you can provide, the better.

So as you can see, getting an entry in Wikipedia takes some effort and preparation, but it can be done. Big thanks to Bandzoogle members Enter the Haggis (Wikipedia page) and Delaney Gibson (Wikipedia page) for their insight. We hope this article will help you get a page on Wikipedia as well.

Posted by Anonymous
Nice! Thanks!

Posted by Anonymous
Yes. Thank you.

Posted by Anonymous
Getting a page seems like a worthy ideal. For most of us, it's more likely we'll get on American Idol than score a Wikipedia page. The WikiNazi editors have an arsenal of howitzers aimed at us peons who can only dream of landing a few electrons of glory on their hallowed servers.

Posted by seo plugin
Hello Web Admin, I noticed that your On-Page SEO is is missing a few factors, for one you do not use all three H tags in your post, also I notice that you are not using bold or italics properly in your SEO optimization. On-Page SEO means more now than ever since the new Google update: Panda. No longer are backlinks and simply pinging or sending out a RSS feed the key to getting Google PageRank or Alexa Rankings, You now NEED On-Page SEO. So what is good On-Page SEO?First your keyword must appear in the title.Then it must appear in the URL.You have to optimize your keyword and make sure that it has a nice keyword density of 3-5% in your article with relevant LSI (Latent Semantic Indexing). Then you should spread all H1,H2,H3 tags in your article.Your Keyword should appear in your first paragraph and in the last sentence of the page. You should have relevant usage of Bold and italics of your keyword.There should be one internal link to a page on your blog and you should have one image with an alt tag that has your keyword....wait there's even more Now what if i told you there was a simple Wordpress plugin that does all the On-Page SEO, and automatically for you? That's right AUTOMATICALLY, just watch this 4minute video for more information at. Seo Plugin seo plugin http://www.SeoOptimizedRankings.com/