Your Home Recording Studio: 5 Tips to Help You Mix Like a Pro 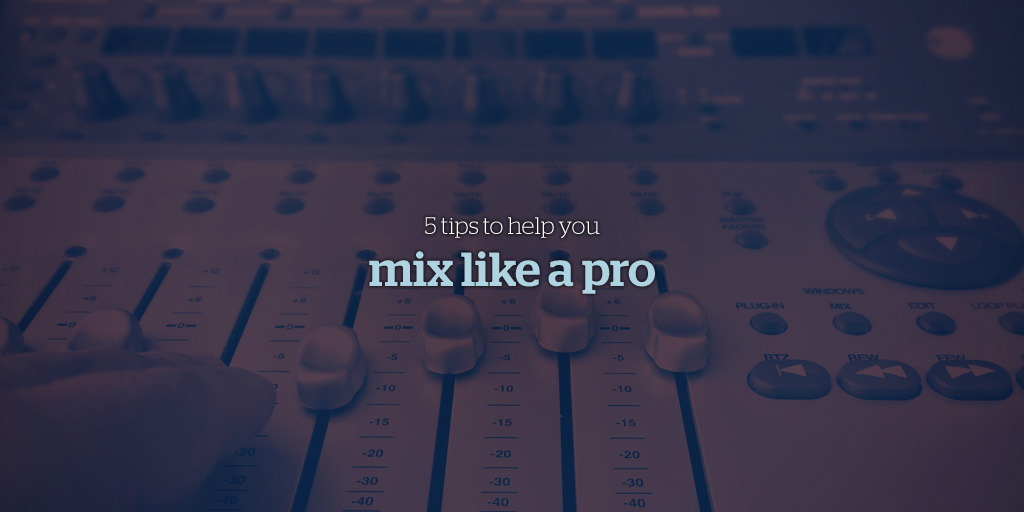 After getting the most out of your home studio environment and setting effective goals for recording sessions, you should now have a great recording to work with.

Now we’re going to deal with the all important step of mixing. Here are 5 ways to ensure that you have a great recording to mix.

[Learn how to build a website for your recording studio]

1. Be prepared before recording

One secret to a great mix is being 100% prepared BEFORE recording.

Great mixes almost always come from a great recording session. So prepare everything as best you can before recording a single note. Make sure the artist or band is well practiced, rested, fed and ready. Have notes on arrangements and lyrics, mix ideas printed or on a laptop, phone or ipad. And have your room set up with mics, amps etc., exactly how you want it.

Get the singer to do vocal exercises and get warmed up ahead of time. All the sound and parts should be as ready as they can be before you send that electric signal down the chain to your computer.

The better your tracks are going into the mix, the less you’ll have to mix at all (let alone fix anything). The less problem frequencies, noise, or anything else printed on your tracks, the better. 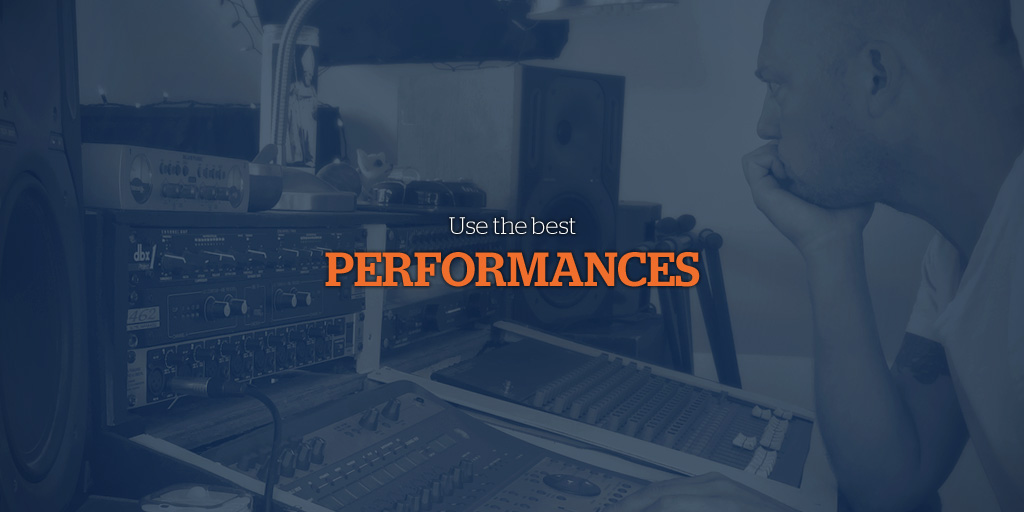 2. Use the best performances for the final mix

Either way, the idea is that you can record the same guitar solo a whole bunch of times, and pick the best performance for your final mixed track. You can even build a solo from each take and stitch together the parts you like best.

This is arguably the greatest advantage digital recording has over the old days of tape reels. You can easily make loads of edits to specific tracks in the song, and changes can be made in a ‘non-destructive’ way, so you can undo edits if needed.

In recording circles, this is called ‘comping’ - short for ‘compilation’ - and you can do it with any of your tracks to put together the best take for the final mix. Comping can sometimes feel like making Frankensteins’ monster. But with quality takes, and a bit of practice, you’ll wind up with a great sounding starter mix before adjusting any track.

3. Consider the arrangement before mixing

If you’ve been in a studio, you may have experienced the ‘letdown in the chorus’ phenomenon when listening to a track. Everything sounds great in the verse, perfect harmonies, things sound punchy, the chorus hits, and… it feels weak.

When a chorus doesn’t sound strong in the studio, it’s usually because there’s too much going on in the verses before it. The chorus is that moment all of your fans know the words to, so if it doesn’t make an impact, the song itself can be in trouble.

In this case, less is more. With digital recording, it’s never been easier to find out what you need ‘less’ of in certain parts of your song. You can do this by editing your arrangements in the software prior to getting down to your mix.

Be brave and try pulling out the double vocal and rhythm guitar in the first verse - heck, drop the bass and make it just drums and the singer, who knows - try everything. Maybe that otherwise well played piano solo in the middle simply doesn’t work in the song, so just chop it out and see if it flows better.

Nervous about cutting bits away? Try listening to the song and use your ‘mute’ buttons on different tracks to see if things start popping better where they need to. This is where you can get that incredible ‘a-ha!’ moment. Once you hear how you think it should sound with some rough muting, you can be more confident in your timeline edits.

When you take the time to consider the arrangement prior to mixing, you’ll find muting or editing tracks in certain areas will give your song impact where it needs it most. 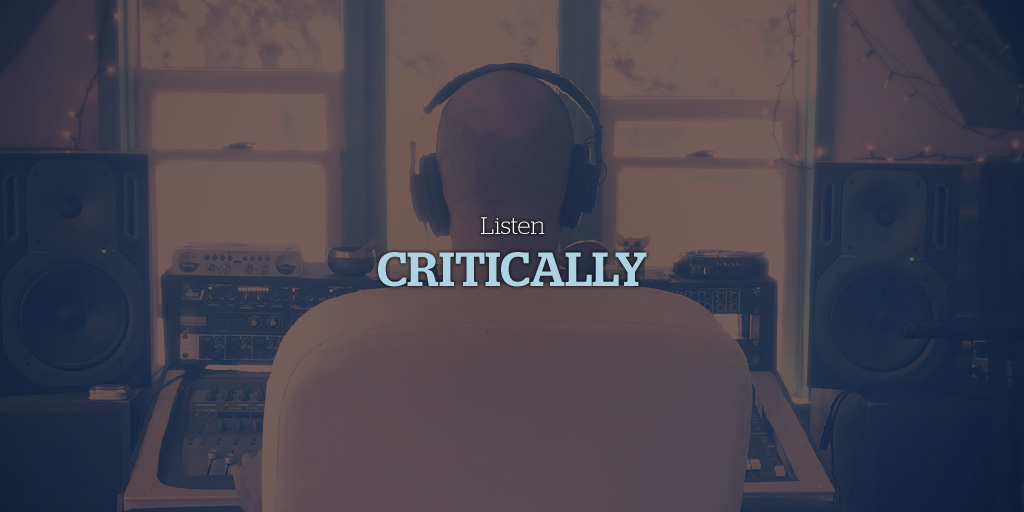 4. Before touching the EQ or adding effects, listen critically

At last, the mix moment has come, faders set to kill. Then the voice in your head sounds like this:

‘Okay, so I want to reduce the 3k range completely using a parametric EQ, and add a ping pong delay on the vocals, then I want two flangers on the guitar solo along with...’

If you’re hearing something like this in your head, silence it with four words: Stop. And. Listen. Critically.

Most recording software comes with EQ, processing and effects - often referred to as ‘plugins’. Plugins look cool, with shiny buttons and neat high tech or vintage styling. But if you’ve followed the steps leading up to mixing, and you give a good, well-rested listen to that song, you’ll probably find your mix doesn’t need a lot of that stuff on your tracks.

For starters, most plugins add volume ‘gain’ to a track - so the more plugins added, the louder it will get. One or two plugins on a track may not make a noticeable change in volume, but start adding more and you’ll likely be hearing things in your mix that weren’t there before.

Equalization or ‘EQ’ is usually a must. A good rule of thumb with EQ is to lean towards ‘reducing’ certain frequencies you don’t want on a track, instead of increasing or ‘boosting’ frequencies you like. You usually don’t need to reduce much to start hearing things get clarity in your mix, and it will keep the gain down in your effects chain.

Effects like delays and reverbs can add a more professional sound. But they will add more time to the end of a musical phrase, and that extends the length of phrases in your tracks. This can add more of the track’s frequency range to the overall mix, which can sometimes give a ‘muddying’ effect. If that starts happening, consider rolling some of it off in the mix.

Finally, effects are just that - an effect. They’re neat, but like action movies, they shouldn’t be gratuitous.  An effect needs to have a reason to be where it is, otherwise, it’s this thing doing nothing in the middle of an otherwise great song.

With mixing tracks you will need to accept that there are some things that simply cannot be changed or ‘fixed’ in the mix. You can try, but… well, it just won’t happen. You need to identify them in your recording, and have the wisdom to accept that there’s nothing you can do to change them.

With that, be forewarned that no fancy bit of gear, plugin, or software on earth can correct or fully remove:

Many artists record the band together in the same room simultaneously. This can be a more ‘organic’ way of recording. But since each live take will be performed slightly differently, be aware that recording the group together will greatly limit any editing you would need to do.

With things like noise on a track, in most cases, when it’s printed in the recording, it’s not going to come off. Some processing can help correct problems like this by reducing or removing certain frequencies, but this is often at the expense of other frequencies you will want to keep.

In a nutshell, there are some things that, with a bit of work, can be fixed in the mix. But trying to mix low quality tracks will usually only give you a really clear sounding, badly done recording. If this is the case, the easiest solution is to go back and get a better take, or overdub parts of the track to correct the problem.

Posted by seo plugin
Hello Web Admin, I noticed that your On-Page SEO is is missing a few factors, for one you do not use all three H tags in your post, also I notice that you are not using bold or italics properly in your SEO optimization. On-Page SEO means more now than ever since the new Google update: Panda. No longer are backlinks and simply pinging or sending out a RSS feed the key to getting Google PageRank or Alexa Rankings, You now NEED On-Page SEO. So what is good On-Page SEO?First your keyword must appear in the title.Then it must appear in the URL.You have to optimize your keyword and make sure that it has a nice keyword density of 3-5% in your article with relevant LSI (Latent Semantic Indexing). Then you should spread all H1,H2,H3 tags in your article.Your Keyword should appear in your first paragraph and in the last sentence of the page. You should have relevant usage of Bold and italics of your keyword.There should be one internal link to a page on your blog and you should have one image with an alt tag that has your keyword....wait there's even more Now what if i told you there was a simple Wordpress plugin that does all the On-Page SEO, and automatically for you? That's right AUTOMATICALLY, just watch this 4minute video for more information at. Seo Plugin seo plugin http://www.SEORankingLinks.com/