What's It REALLY Like to Be a Full-Time Songwriter for a Living? 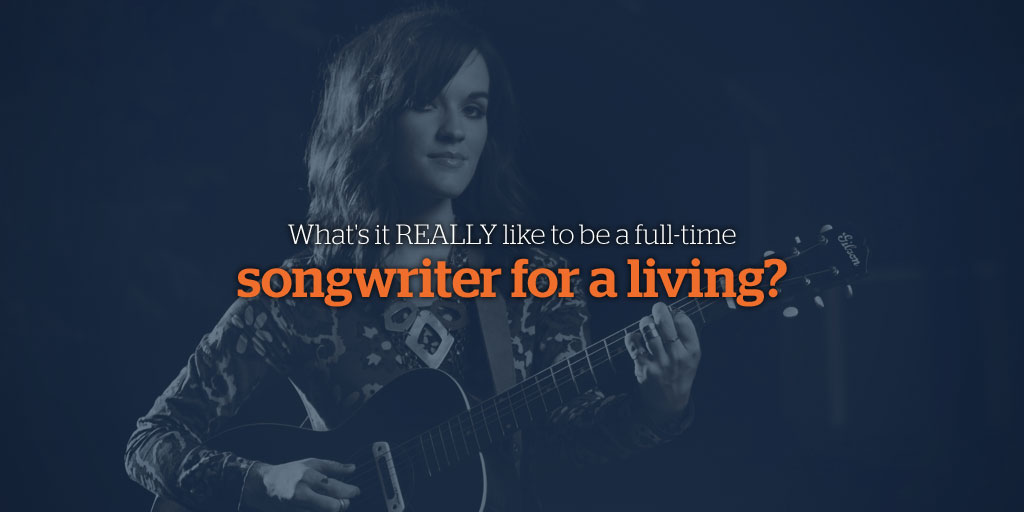 This is a guest post by Sam Friedman, which originally appeared on the Sonicbids Blog.

For most songwriters, writing is a way of navigating through life. Each song signifies growth, reflection, and future aspirations. Many tunesmiths write solely for themselves and their respective audiences, but there's more potential to share our songs and stories.

Now 26, Lacy Green took her relentless passion for songwriting to Nashville several years ago, where she landed a full-time gig as a staff writer for one of Nashville's famous Music Row publishing companies, Dan Hodges Music, at just 24 years old.

Any aspiring songwriter would probably wonder, what is it really like to write songs for other people as a job? Does the passion subside once you're working for a publishing company and have to meet a quota? And how do you even land a coveted full-time songwriting gig in the first place? We had a chance to catch up with Green to find out the answers.

You've been writing songs since you were 13. Tell us about the evolution of your songwriting – how has it developed over the years, ultimately getting you to where you are today as a staff songwriter in Nashville?

Writing has always been the best way for me to sort things out. As a kid, I was always writing stories and poems and free-form stuff. Even when I got in trouble, all of my apologies came in handwritten letters. Likewise, music was a constant presence in my house. When I was 13, my dad taught me a few chords on the guitar, and those two loves merged to lead me to songwriting.

For the next several years, I was writing solely on my own and for myself. [The songs] were pretty bad, and I wasn’t that intentional about them, but about the time I decided to move to Nashville, I was lucky enough to land a few of my songs on the soundtrack of an indie film. That opened a few doors, and for the next year and a half, I did nothing but co-write and try to learn from more established writers in town. Six months after I moved to Nashville, I met my current publisher, and a year later, he signed me to my first deal.

All the years I spent writing on my own were important – that's how I developed my voice as a writer – but being in Nashville collaborating helped me to broaden that voice and become more consistent.

[How to Find Co-Writers]

Do you have a particular songwriting routine or process you typically follow?

I think the best way to describe it is controlled chaos. I try to show up prepared (usually with some lyrical idea or piece of music), but also with a willingness to go off script if that's where the magic is that day. I believe that if you're always trying to serve that particular song/idea, it will take the lead and tell you what it needs to be. Some days, it's like searching for a drop in a flood, and other days, it's like trying to create a flood out of a drop. So it just depends.

At just 24 years old, you landed a publishing deal in Nashville, allowing you to write songs full-time. What were the key points in your journey to landing that deal?

"This business is about so much more than just a great song."

My strategy was pretty simple: try to write the best songs you can, and then go out and play them for anyone who will listen. Everyone knows someone in Nashville, so no opportunity is too small. Say yes to everything you can, and you're bound to get better and get connected.

I would also tell every aspiring writer I know to become a member at NSAI and to get connected at a performing rights organization. Those organizations are open to everyone and can provide invaluable resources and knowledge.

This business is about so much more than just a great song.

What does a typical day of work as a staff writer look like for you?

Most days, I show up at my office to write between 10:00 and 11:00 a.m. I'm typically co-writing with someone that's been set up by my publisher or myself. We'll typically write through to the afternoon, at which point we've hopefully come out with a decent song. We'll make a quick work tape (which is code for iPhone recording) and send it along with the lyrics to our respective publishers to get their feedback. Sometimes I'll have a second writing session around 2:00 or 3:00 p.m., at which point the process starts over.

The rest of the time is spent drinking copious amounts of coffee, recording demos, performing those songs live at writer rounds around Nashville, and generally just trying to give those songs life and support so they can be heard and found.

How does it feel to be writing songs for other people as a job vs. writing for yourself?

My mom is a real estate agent, and she used to talk about how the key to selling a house was about allowing the buyer to see themselves in it. So if your house is so overly cluttered with your stuff, then it's more difficult for someone to visualize their own life in it. I think about that a lot when I'm writing. Whether it's me or someone else delivering the song doesn't really matter. The question for me is, am I writing an honest song? Am I writing it in such a way that someone else could still see themselves in it?

What's the most surprising thing you've learned about the business of songwriting and music publishing?

I think it was realizing that this business is about so much more than just a great song. It's unbelievable the number of amazing songs that are written in this town every day that will never make it out of the room they were written in. Great songs require great champions, great artists, and great timing to take them to the someone else's ears. There are so many variables.

[Do You Need a Music Publisher?]

Through Sonicbids, you landed an impressive gig at Nashville's legendary Bluebird Cafe. What was that experience like?

It was awesome! The Bluebird Cafe is my favorite venue in Nashville. You can just feel the magic of all the great songs that have been performed in that room. I always leave there feeling grateful, inspired, and wanting to write better songs.

Posted by Jeremey Slayton
Very interesting for me personally. Thanks for the article. Things I wondered about.

Posted by J
Thanks for sharing, very helpful words.