The Introverted Musician's Guide to Performing 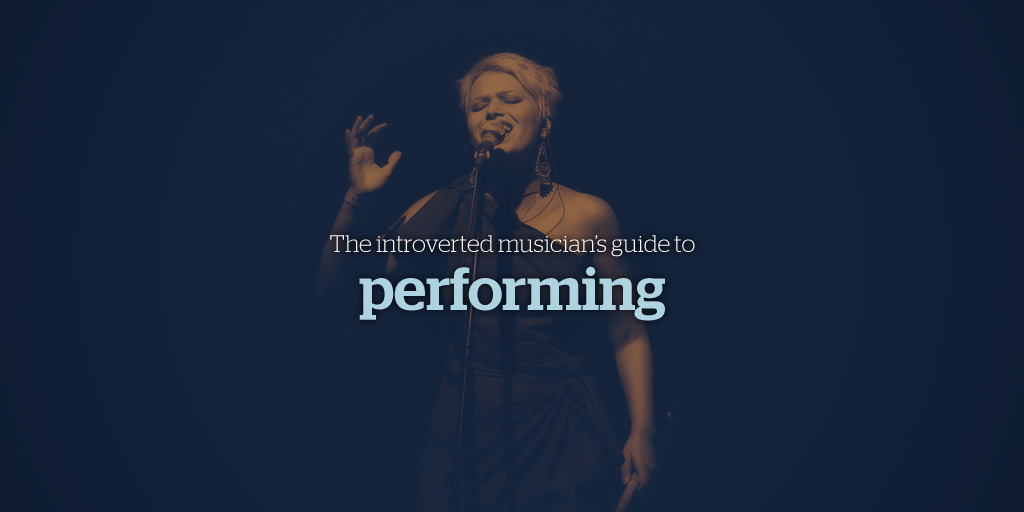 This is a guest post by Casey van Wensem, which originally appeared on the Sonicbids Blog.

Being a musician involves wearing many hats. Most great musicians have mastered the art of both practicing their chops alone, and displaying those chops in front of large crowds. As an introvert, you may feel more comfortable practicing alone, but that doesn’t mean you can’t be an amazing performer as well; you might just have to change the way you approach performance in order to make it work for you. Here are some tools introverted musicians can use to improve their stage presence and overall performing abilities.

1. Throw away the misconceptions

Many people (including introverts themselves) have misconceptions about what introversion actually means. Susan Cain, bestselling author of Quiet: The Power of Introverts in a World That Can’t Stop Talking, points out that shyness and introversion aren’t the same, even though most of us assume they are.

"Shyness is the fear of negative judgment, and introversion is a preference for quiet, minimally stimulating environments," she writes. Barbra Streisand, for example, is someone that most of us would immediately identify as being comfortable in front of other people, but not so, says Cain. "Barbra Streisand has an outgoing, larger than life personality, but a paralyzing case of stage fright: she’s a shy extrovert."

Another misconception is that introverts get stage fright. But even if you’re a shy introvert, that doesn’t necessarily mean you have performance anxiety. (By the way, if you’re curious to see if you’re a shy introvert or not, you can take this online shyness test developed by researchers at Wellesley College.) Most shy people are moderately shy and can get by just fine in front of people despite their shyness. It’s only when this shyness becomes extreme that it can lead to cases of performance anxiety (which, by the way, it something you can conquer, just as other performers like Barbra Streisand have).

Just like in other areas of DIY musician life, introverts have the upper hand over extroverts in some ways when it comes to performing. Psychologists have found that introverts often make better public speakers than extroverts, because introverts tend to take more time to prepare and think things through. So while your extroverted bandmates might be chatting it up with fans or other musicians before the gig, you can feel justified in taking this time to go over the setlist in your head, warm up your voice, or simply spend some quiet time alone.

3. Prepare some topics for between songs

Sometimes the most daunting thing about performing is not playing the songs, but thinking about what to say between songs. Because introverts don’t tend to be as quick on their feet as extroverts in social situations, it could be a good idea to prepare some topics beforehand to help fill those awkward silences if you’re the one tasked with talking to the audience.

[4 Ways to Fill Awkward Silences During Your Performances]

As Cain has pointed out, introverts don’t always act like they feel. "Introverts are capable of acting like extroverts for the sake of work they consider important, people they love, or anything they value highly," she says. This is because of a phenomenon she calls Free Trait Theory, which says that people are born with certain natural dispositions, but can successfully act against these dispositions when pursuing "core personal projects." So even if you don’t feel like going up onstage every time you have a gig, you can learn when to turn on the extrovert tap, so to speak.

At the same time, going too far into Free Trait territory can be dangerous for your stage presence, if not for your personal health. According to research from Cambridge University, faking your personality for too long could lead to health problems such as decreased immune system functioning. Plus, there’s always the danger that you could get tired of pretending to be an extrovert onstage and come across as fake and awkward.

It’s also important to remember that performing onstage isn’t the same as interacting with people at a party or a networking event; while it may serve you well to act more gregarious than normal in a networking situation, you might actually have more luck capturing the attention of fans on stage simply by being real. Sometimes you can actually exude more energy simply by standing stoically rather than jumping around like a spastic monkey.

Both extroverts and introverts need time to recharge. Research has found that extroverts feel less stressed at work when they take time throughout the day to be social. If this is the case, then it would follow that the opposite is true for introverts. If performing takes a lot of your energy, then naturally, you’ll want to take time after each gig to regain that energy.

[4 Ways Even the Shyest Artists Can Develop Their Onstage Persona]

Even if you don’t feel comfortable at all onstage, it may help to think of performing as part of your art, just like writing songs or recording an album. It may be the part you dread the most, but for your fans, it could be the best way to experience your music. You may find performing exhausting, but if you learn to do it right, your fans will find it exhilarating. And after all, isn’t playing music all about creating amazing experiences?

Casey van Wensem is a freelance composer, musician, and writer living in Kelowna, B.C., Canada. You can hear his musical work at birdscompanionmusic.com and read his written work at caseyvanwensemwriting.com.

Posted by Monikker Music
Thank you so much for the resources, I'm a shy introvert! Lol.