Music Licensing 101: 8 royalties you can collect from your songs 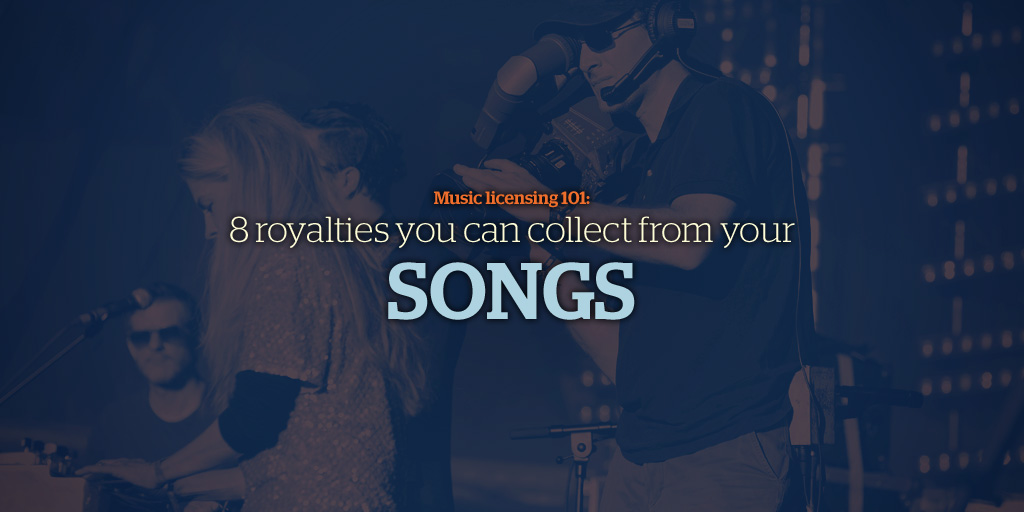 PRO, licensing, synchronization, royalties - learning the language of music publishing can be daunting. But it’s important to take advantage of all of the revenue streams available to you as a musician and songwriter!

In Part 1 of this series, we covered what a performing rights organization (PRO) is, what they do, and how they can collect royalties for your music.

[Music Licensing 101: What is a Performing Rights Organization?]

For our second post in this series, we’re taking a closer look at the different types of royalties that can earn you money from your music!

Synchronization royalties are earned when a track is placed as a score or soundtrack to a moving work like a film, TV show, video game, or movie. The producer of this work must acquire a license to use the song as a “synchronization” to the pictures displayed on screen. Typically, these are paid to the PRO and distributed with performance rights royalties.

Synchronization royalties also exist in the digital world! If one of your songs is used in the background of a video uploaded to YouTube, you are owed a royalty for its use. Services like Audiam can help you collect these royalties.

[How to make money from your music on YouTube]

Public Performance royalties get paid to songwriters and publishers (via their PRO) whenever their songs are performed in public. This applies to plays on AM and FM radio stations, in restaurants, sports arenas, shopping malls, or any other public place. These are also paid to the rights holders when a third party performs a cover version of the song.

Digital Performance royalties are paid out for digital performances or streams. These include:

Print Rights are royalties due for usage of lyrics or written musical works. For example, sheet music, magazines or books, apps or lyric websites. It can also apply to any apparel featuring a songwriter’s words, as well. These royalties are paid to the publisher of a song.

DART royalties (or Digital Audio Recording Devices and Media) were established to allow for reproduction of works through digital formats on digital audio tapes to combat infringement lawsuits. These royalties can be distributed to copyright holders and publishers whose sound recording or musical work has been played publicly.

These types of royalties vary based on country and usage, and they’re paid to PROs, publishers, and occasionally record labels. While it is an option to sign up with multiple PROs to represent you internationally, domestic PROs can also collect any foreign royalties due to you as well.

Foreign mechanical royalties are paid out to the PRO by the digital distributor, but if you’re not registered with a PRO (or society) in that country, you’ll be considered a “lost” writer.

“Lost” writers can, after a certain period of time, collect these payments as black box royalties - essentially an escrow account where countries will keep these royalties for a certain amount of time. To ensure that you’re collecting those royalties, you can use a service like Songtrust.

Posted by Jean-Robert Bisaillon
Not sure about all this. With regards to sync and digital sync it is not clear wether you are talking about a track or a song. Are we talking about recordings or works? Interactive performance streams monies are collected by PRO's for works and by both digital distributors and some PRO's for recordings. Its a rough world out there!

Posted by Matt Riley
Do performance Royalties apply for arrangement of public domain songs? For instance if someone performs my arrangement?

Posted by alfalah12345
Its a rough world out there! http://www.afu.ac.ae/en/goals/

Posted by tim
how do I collect "print rights" from an artist that sings my lyrics? thanks

Posted by Angelina Gargano~Mountain River Records
HI, could you please please if you don't mind answer a couple questions. ...so do you know about neighboring rights and how to collect these royalties? And do you know about soundexchange membership for artists and labels (not a "registered" account for artist and record Iabel)? Would really appreciate any experiences or knowledge. I ask you as you are in this Business and I value your opinion. Have a great day, Thanks for your time and help, Angelina at www.angelinagargano.com

Posted by Desi Thorne
Hi @Angelina Gargano~Mountain River Records, unfortunately since we are a website provider, we can't provide guidance on this. I would suggest contacting Soundexchange directly for that inquiry!