Posted by Sammy Hakim on May 20, 2020 in: Music Career Advice, COVID-19 Resources for Musicians 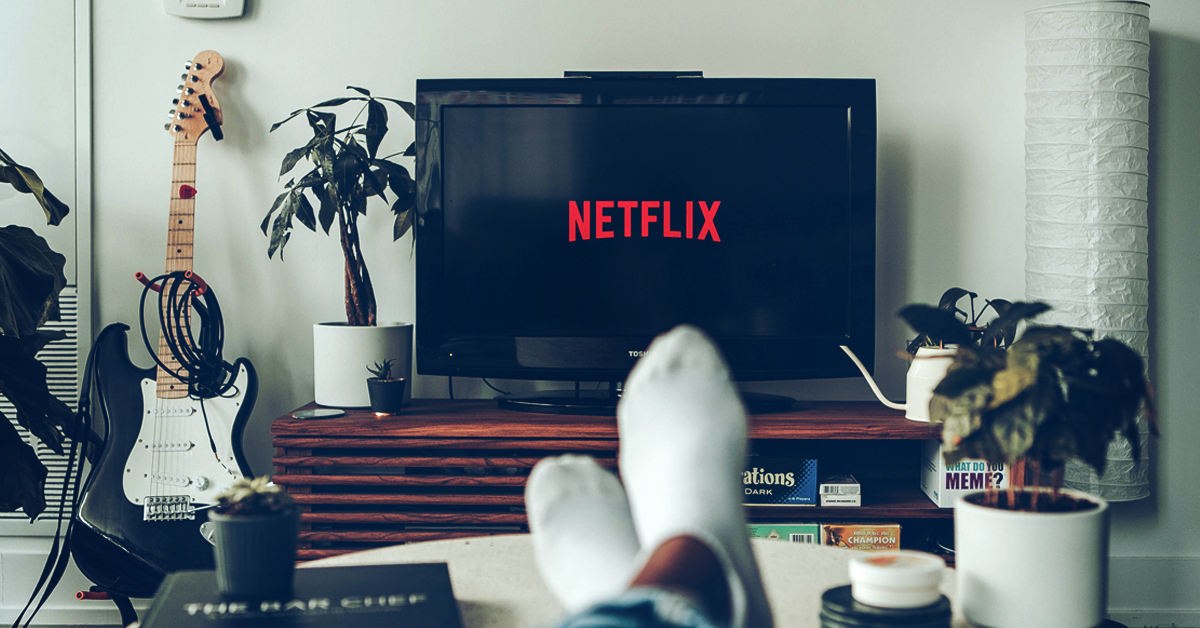 Let’s face it, we’re all home much more than usual these days, and Netflix knows that. Binges are inevitable. Still, some of us (me included) hold on to a bit of guilt for spending six hours straight watching “Tiger King” or “Homeland”, or any other of the hundreds of series currently streaming on the platform.

But you can let go of that guilt right now. A good old fashioned Netflix binge can actually be as productive to your songwriting practice as watching any documentary, reading any book, or visiting any museum—if you let it.

Though it often slips our mind to use television like any other media resource—or perhaps it just feels icky—TV shows can inspire, inform, and emote in brilliant ways, and they can educate your own creative sensibilities as well. That emotional inspiration can become a new and valuable tool in your toolbox.

So grab your notebook, because your Netflix and chill time just turned into homework!

Show titles are a great place to get started if you’re in a songwriting rut. Here’s an easy example: think about the phrase “Stranger Things.” Without looking at the series and writing an on-the-nose song about the supernatural, how can you spin it into something that makes sense to your life? What’s a “stranger thing” in your reality?

Additionally, look to episode titles for priceless ideas as well. They’re usually a little more unique and quirky than the show title itself, with plot points, theme references, metaphors, and symbolism. So dive into these for some universal concepts when looking for ways to shape your wordplay.

Sometimes all it takes is a little jumper cable boost to get your lyric-writing mind to fill in those gaps.

Learn more: 6 creative kicks in the butt for songwriters

Characters say the darndest things, don’t they? While 90% of the time those things truly don’t belong shoved into your latest musical opus, make sure you keep a pen and pad handy just in case. You really never know what’s going to connect to your personal experience in a meaningful way.

That pretty much refers to dialogue in passing, but you might also be able to transform those truly iconic character lines, as listeners often love to grasp onto a lyric that feels familiar.

Think about lines we frequently refer to, like: “Paint me like one of your French girls,” “Frankly my dear, I don’t give a damn,” “Houston, we have a problem,” “Luke, I am your father,” and all those other quotes that seem to always be on the tip of your tongue.

Characters are studies in human reactions, emotions, and vulnerability. But more importantly, they’re often portrayed as over-the-top caricatures of extreme dynamics and actions that most of us could never get away with in real life. These entertaining narratives of grandeur reveal a lot about the human condition and they’re a lot of fun to use in stories.

Use them in yours! Why not amplify the drama in your songs beyond human scale?

Secondly, it’s often fairly simple to determine a character’s driving motivation when you’re watching their actions unfold linearly on a screen in front of you. It’s a bit tougher in the fragmented nature of song verse lyrics, so you can use that to your advantage. Piece a little bit of this with a little bit of that to create something complex and ambiguous—songs are perfect for that!

Again, folks. Take notes. Do I really need to keep saying that?

TV shows almost always showcase common moral themes in both obvious upfront ways, and in more subtle disbursements. These themes and symbols can be used to enhance the lyrical (and musical) elements of your songs.

Musical themes, or leitmotifs, can be enormously expressive elements to bring in and out of your music. Think about utilizing certain progressions or rhythms to signal a specific perspective or element in your music that appears and reappears. This can create just as much consistency as a character walking onto the screen.

Though most pop culture music isn’t as cinematic as say, Wagner, you’d probably be surprised to learn about all the music, lighting, and linguistic cues that go into building your subconscious relationships with characters. Just like how some lyrics and topline melodies just seem to always get stuck in your head...

When it comes to expressing lyrical themes—such as life, death, love, and other symbolic elements (olive branches, sinking ships, etc.)—all of these and more exist within the shows you’re watching. You've just got to be on the lookout for them.

How did you react throughout the show’s ups and downs? Did that one couple you love end up together? Did you cry when Mufasa died?

Well, mapping those emotions and how they flow can be used for fueling your own storytelling. Keeping the previous tools in mind, and combining them together with your personal song ideas can help you create a brand new masterpiece of your own.

So you see, there’s no need to feel guilty about those next six hours you’re planning to spend cuddled up in sweatpants on your couch. Just grab something to take notes with, settle in, and enjoy. You’re being more productive than you think.

Sammy Hakim is an up and coming young songwriter based in Los Angeles. In May 2018 she graduated from Berklee College of Music with a Major in songwriting and a focus in music business. These days she spends most of her time in songwriting sessions with artists all over the country.

Photo by Mollie Sivaram on Unsplash

15 years of advice, inspiration and resources for musicians navigating the new music industry delivered right to your inbox.