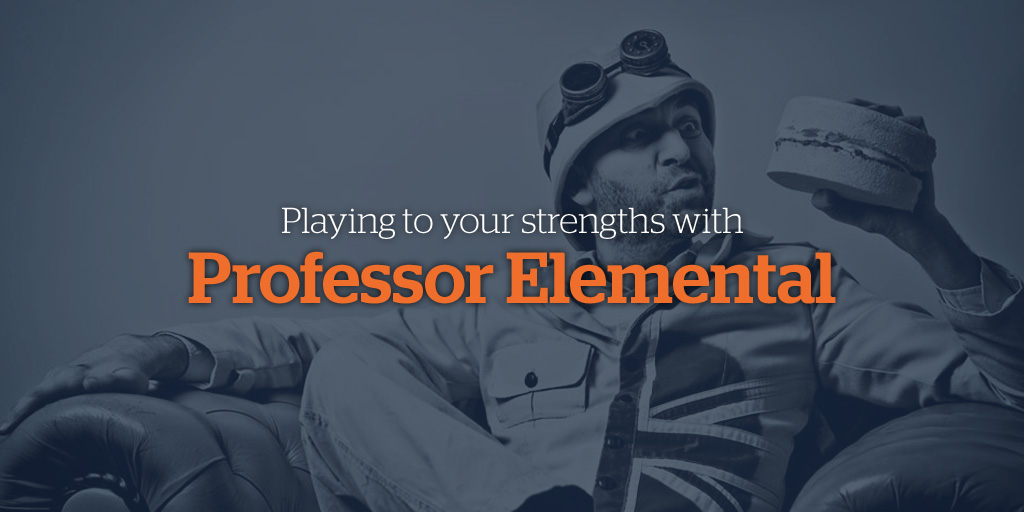 To say that Professor Elemental is just a hip-hop artist would be very, very, well... wrong.  It would be like saying Einstein was just an average mind, or that Facebook is just for pictures.

Not only does Professor Elemental have a lot of albums and singles under his belt, he tours regularly, is a success on YouTube with videos like his 1 million + viewed  ‘Cup Of Brown Joy’, is a well known figure in the Steampunk community, and regularly performs and attends events such as San Diego Comic Con, Glastonbury Festival and more.

He’s an accomplished voice over artist, is a freelance workshop facilitator, has published books, comics, and even has his own brand of tea.

You may think an organization like The British Eccentric Club naming him the ‘Greatest Living Eccentric & most Eccentric Artist’ in 2012 is not that surprising. But along with press in the Wall Street Journal, Daily Telegraph, Cracked, and more, he’s found the mechanism for success, along with establishing his own niche.

We spoke to Paul Alborough, aka Professor Elemental, about techniques on how to find your own niche, and the benefits you can get from doing so.

Q. As we’ve already mentioned, you’ve definitely found a great niche market for what you do, that crosses over into a lot of areas, from music, to visual mediums like Youtube and comics.

Did you have an idea of where that market was, and what you wanted to do early on?  Or was it more of an organic process that evolved over time?

A. It evolved pretty naturally. After a good few years of trying to convince the world that it needed another middle class, aging white rapper (it didn’t), I stopped worrying about trying to impress people and began having fun with Hip Hop.

Hitting upon the professor Elemental character opened up my music to the sort of people that I wanted to hang out with (to put it bluntly, nerds like me) and as the character expanded, it became a lense through which to focus all of my creative energies.

With the character firmly established, it also opened the door to working with others to create comics, toys, videos and novels. For me the key to creating all that fun stuff, is to find like minded people to collaborate with. With collaborations, not only do you have someone to help you keep motivated, but you also can work with them in getting the project out to people- so it’s not just you endlessly trying to promote yourself.

Q. Similar to the previous question, but the professor really is an endearing persona with a very clear image.  Did you have an idea of, or know who Professor Elemental was when you were getting started?  And how did the term ‘chap hop’ come about?

A. The Professor came from a one off song with producer Tom Caruana* and is a blend of Viv Stanshall, Mr Toad and a few other influences.  For a while he was part of a travelling Victorian variety show called ‘Come into my parlour’ which really helped develop him as a character. But the Professor is basically me when I am a little over excited or have had too much gin.

God knows where the term ‘Chap hop’ came about- I think it’s actually from Mr B the gentleman rhymer. Much as I hate to admit it.

(*Tom Caruana produces nearly all of my music and is absolutely incredible- head over to his Bandzoogle page www.teasearecords.net and check him out, he’s always giving away amazing music)

Q. Your website definitely covers a lot of bases - including information on charity work you do, and a ‘custom songs’ page, which I’ve got to say, is a really great idea. In your mind, what’s the most important feature or option that you use with your Bandzoogle pages?

A. One of the things I have loved about Bandzoogle since it began, is how easy it is to see which of your pages are actually getting read. Gauging that interaction with fans is a great way to determine what you should prioritise on the site.

I like to the keep the new stuff on the front page and constantly update it with links to galleries of fan art, or new merch for people to buy.

Also, having an easy to access list of shows makes all the difference. One tip I recommend, is to cut and paste your list of gigs into the bottom of monthly mail outs, I get a lot of show enquiries that way too.

Q. In what area of being Professor Elemental do you have the most fun, and what is the most work for you?

A. I love live performances- particularly as I am lucky enough to play at such a wide variety of gigs. I get to meet wonderful people all over the globe and constantly find myself in situations that I never would have dreamed possible. Finding yourself a niche and then taking that niche to new places (for example performing Hip Hop music at a death metal night or a faery festival) has been the magic formula for me.

As any musician reading this will know though, 90% of the rest of the time is taken up by admin and being ‘on the grind’. I spend 9 to 5 most days in a little office space doing all of the administration that makes the fun stuff happen.

Keeping on top of the accounts, emails and social media might not be the most exciting, but it’s a key to success for any independent musician. Plus, when you work for yourself you can take as many tea breaks as you like, so there’s that.

Q. So I have to ask, aside from CDs, comics, toys, and more, you even have your own brand of tea - how easy is it to produce and then sell these more ‘unique’ types of product?  Any big successes or tough sells you can tell us about?

A. ‘Professor Elemental hot sauce’ was a terrible mistake. I can tell you that much. There’s also been a couple of products where my ego has taken priority over my business sense and I got stuff made because I liked it, without establishing if it could make a profit.

Having said that - the comics have been amazing. Entire thanks to writer/ editor Chris Mole and the all star roster of artists we’ve worked with. I’m learning that the key is to make small runs of everything new and if it’s successful, you can always make more. (And then you’ll never have to tip 200 bottles of out of date hot sauce into the city dump.)

Q. In which area do you have the most success in terms of sales? Conferences, online, on the road, or all of the above?

A. Well, it used to be online music, but the bastards at Spotify soon stopped a lot of that.  I still sell a surprising amount of CDs through Bandzoogle and I always ensure I put little random gifts to people with every purchase to say thank you for buying it through the site.

The best way to sell things is after a show though - that magic five minutes after you come off stage and before everyone gets to the bar. The selling of a variety of merch after a show can’t be underestimated.

Q. What strengths do you play to when it comes to getting Professor Elemental to the masses?

A. I’ve definitely learned that, for an act like mine, it’s important to amend the show depending on who you are playing to. I like to add some political comedy into a lot of my sets, but that’s a terrible mistake if you are at a wedding gig or playing to a more conservative crowd.

Online, I try to use Bandzoogle as my ‘one stop shop’. Whenever I have an new album, a track on soundcloud, artwork or a video - I send fans to the Bandzoogle page where I host everything.

Often, if people enjoy the video on your page, they might go and get the album from the site or check out the list of shows. I channel all of my social media towards the site too and it works a treat.

Q. Do you have any advice or strategies you can provide to our readers on how they can find their own strengths?

A. A friend told me recently, when playing a tricky gig always ‘play to the front row’ and I think that is the ideal strategy for music generally; Work out what sort of people lean towards your music naturally.

Think about what sort of people you’d like to appeal to or would want to hang out with at shows. Collaborate with people you enjoy spending time with too and that’s often a good way to expand your fanbase in the right direction.

Basically, when it comes to making music, my rule is usually to only do it, if it sounds like fun. It hasn’t steered me wrong yet.

Check out the Professor Elemental website powered by Bandzoogle: www.professorelemental.com

Build a professional website in minutes and keep 100% of the revenues from selling music, merch, and tickets. Sign up free with Bandzoogle now.