How Pin Up Used Bandzoogle to Promote Their New Single 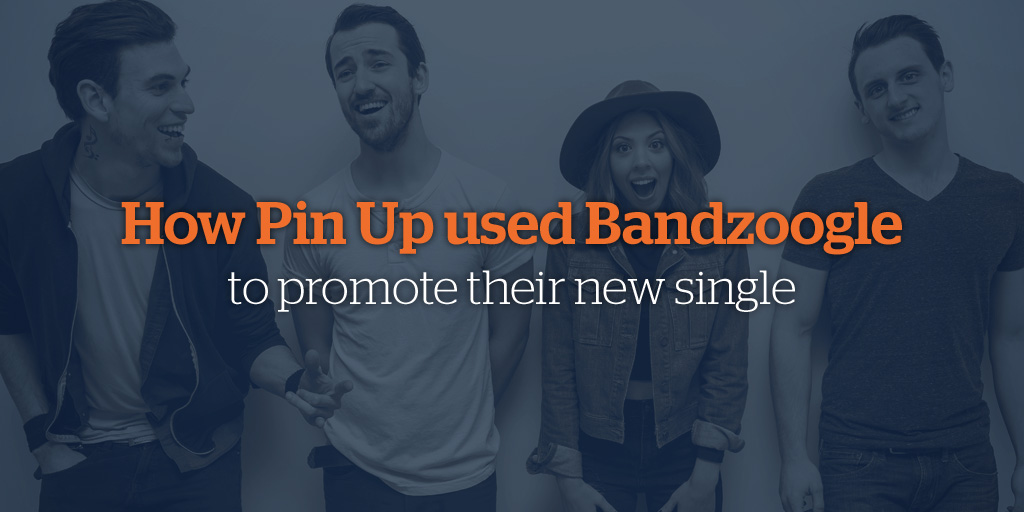 When Pin Up launched their new single “End of the Night”, complete with a music video, the band wanted to promote it on their website as a way to get the single to their fans and grow their audience. We followed the band's indie promotion of the release to find out how they used Bandzoogle tools to help with their project.

Here's the single and video they released.

We'll walk you through the project so you can get an idea of what they did and how it worked.

Pin Up got together in 2012 with an artist development deal, and released their first EP two years ago, which they followed up with extensive touring in their region. The Montreal, Canada based band is working hard at refining and developing their sound as they continue to tour and record. The band is independent, savvy, and constantly trying different ways to market themselves and their music.

The band's key aim for using Bandzoogle during the promo was to grow their fan mailing list, while also getting a high number of video views.

The band is still fairly new and doesn’t have a large audience to promote the single to yet, or a big budget for marketing. So every mailing list signup counts.

But as the band saw it, there was a major drawback with using only YouTube to promote the video. Once new fans watched the video there, there was no clear and effective call-to-action to help the fan stay connected with the band. They saw this as a great way to get video views, but not a great way to build a more permanent audience.

So Pin Up chose to promote the video by embedding it on their band website, where they could customize the fan experience. Because their website was already established on Bandzoogle, they were able to set everything up quickly and easily.

The first thing the band did was build a page dedicated to promoting the single on their website. 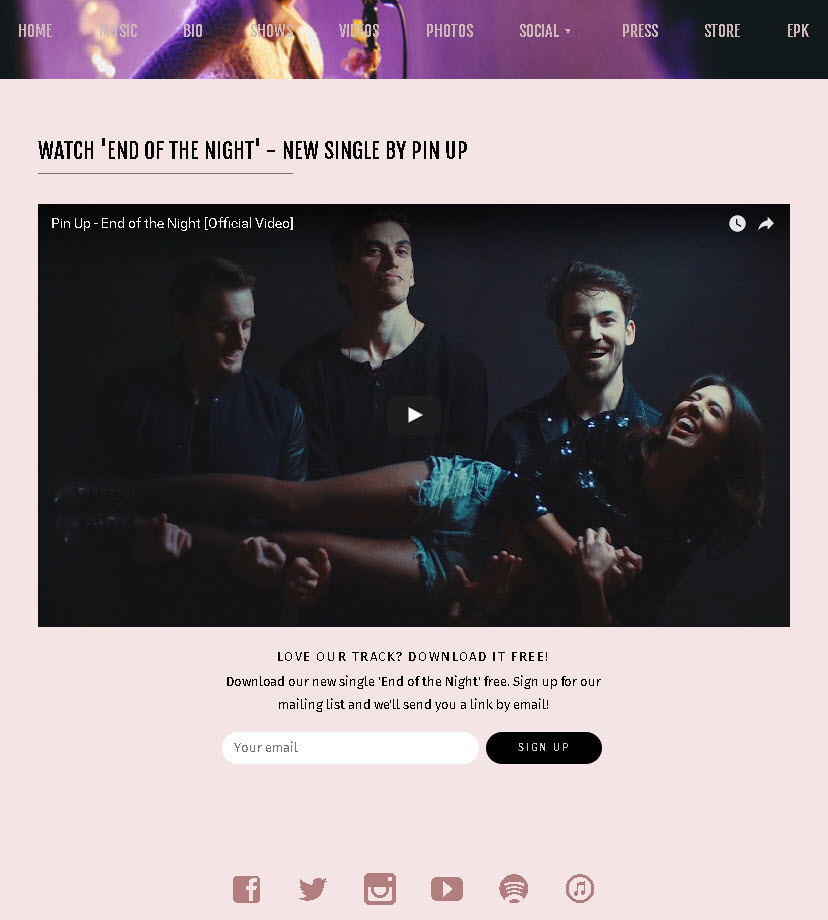 The page featured their video prominently, embedded from YouTube. That way, the first thing a visitor would do is - ideally - hit play on the video. Any plays on this page would also add to their play count on YouTube.

Because this could all be done with built-in Bandzoogle tools, the band was able to set it up and add the feature to their page in a matter of minutes.

Fans who signed up received an email with a link to confirm their subscription. After clicking the link in the email they were direct back to the Pin Up website where they could download the track for free: 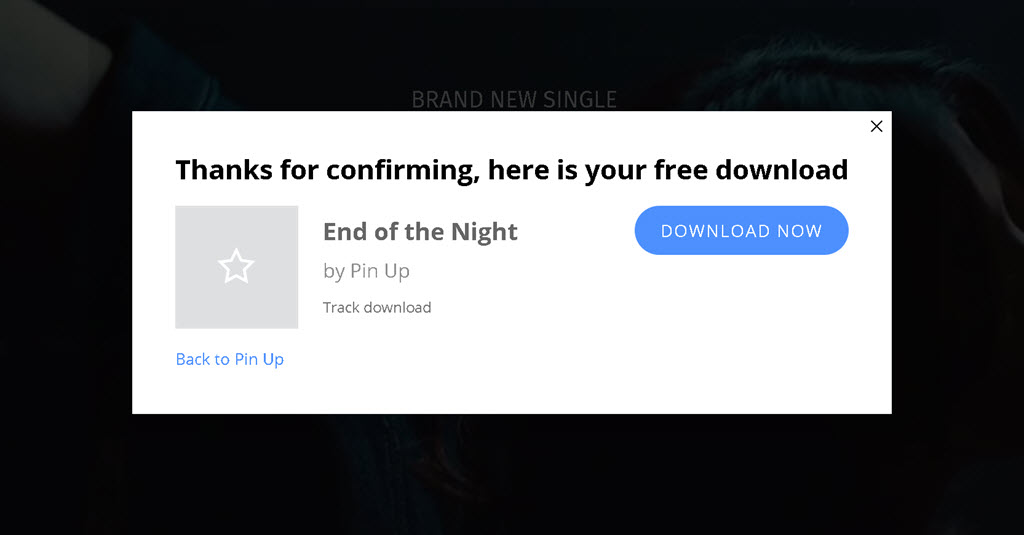 The marketing lingo for this kind of tactic is called "gated content".

By putting this page in place, the band created a mechanism to grow their fan mailing list. They would then have the ability to stay in touch with their fans over the long term using Bandzoogle mailing list tools.

The next thing the band did was to make sure that fans who landed organically on their website homepage would also see the video.

"We wanted to make sure that when people visited our website that they would be visually impressed, and know exactly where to listen to our new release and how to get it," said Pin Up band member Colin.

To accomplish this, they used two Bandzoogle built-in features: the Video Header and Call-to-Action.

The video header played an edited snippet of the video on a loop. The call-to-action button pointed fans to the dedicated page.

This way, fans who landed on the homepage of the website would be drawn to the new video and the free download.

"The Call-to-Action was a really fun part of the release for 'End of the Night'," Colin noted. "Not only did it look good aesthetically, but it made it fun for us to push people to our website because we were seeing sign-ups coming through."

Now all Pin Up had to do was encourage music fans to visit their website. For this they turned to social media.

In addition to promoting the video (and the free download) to their fans by posting it to their socials, they also got creative. They tried things like boosting their Facebook post to people within their touring area who listen to similar kinds of music. They also ran a contest on Twitter.

Some of their social promotion focused on sending fans directly to YouTube to watch the video. And some of it focused on getting music listeners to watch their video on their website and, hopefully, join the mailing list.

They also went out on tour to promote the new music, and worked hard at signing fans up to their list at shows.

After promoting their single for 6 weeks, using a variety of different creative tactics, the band reached about 15,000 video plays. Most of those plays happened directly on YouTube, some from the website embed, and some from other places where they promoted the video.

Over six weeks following the release they were able to get about 500 people to visit their website. They had a mailling list signup rate of 25%, for visitors who landed directly on the dedicated page for the single.

They grew their overall mailing list size by 60%. It wasn't a huge number but because their list wasn't big yet, each and every signup counted. Remember, email is a much more direct and higher-value fan communication channel than social media.

With the mechanisms in place to “capture” fan email signups, Pin Up was able to use their new single to achieve a strong mailing list signup conversion rate of their traffic, and grow their fan list.

Bandzoogle websites have a built-in mailing list tool, and you keep 100% of your sales when you sell music, merch, & tickets online. Sign up free with Bandzoogle now.

Posted by The Hitts
This is awesomeee!!! Thank youuu &lt;3

Posted by Anonymous
Good story and advice. Thanks for the info!✊

Posted by Allison Sharpe
You got it! Thanks for taking the time to check it out.

Posted by Socially Altered
Great to learn this... Very helpful. Thank you