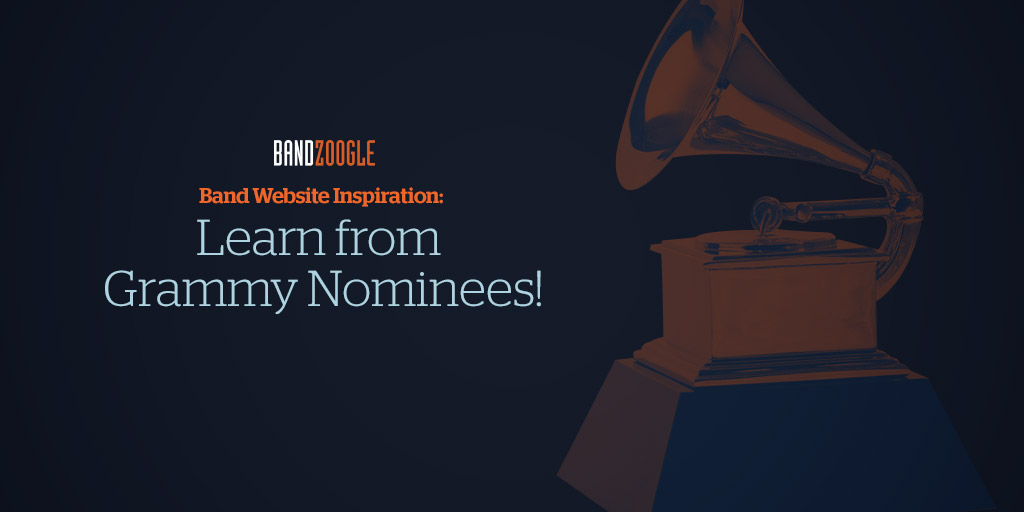 With over 25,000 bands and musicians using Bandzoogle to power their websites, we see artists of all genres, and at different levels of their careers. Everything from garage bands rehearsing to play their first show, unsigned bands who just self-released their debut album, to artists signed to labels with many albums already under their belts.

The Grammy Awards are coming up this weekend, and we’re thrilled that several Bandzoogle members have been nominated! So we wanted to congratulate them, and also highlight their sites so you guys can learn a few website tips from some of the very best musicians around. 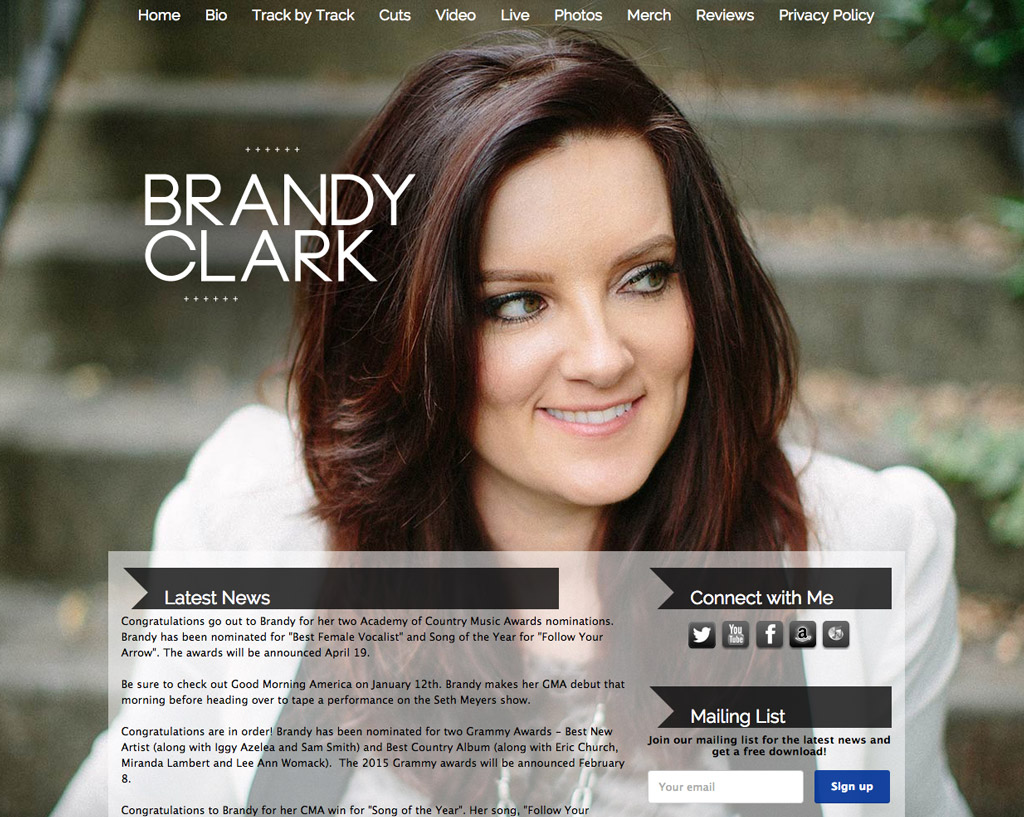 Who: Brandy Clark
What: Country Singer-songwriter
Where: Nashville, TN
Why her website rocks: Brandy Clark is up for *two* Grammys, for Best New Artist & Best Country Album. Incredible. She’ll also be performing during the broadcast alongside Dwight Yoakam!

Brandy’s website is an example of how one nice professional photo can make for a simple, but great looking website. And we love how she puts her best foot forward on the Homepage with news about the Grammy nominations, an appearance on Good Morning America, and Late Night with Seth Meyers. Clearly it’s been a great year so far for Brandy. Congrats and good luck this weekend! 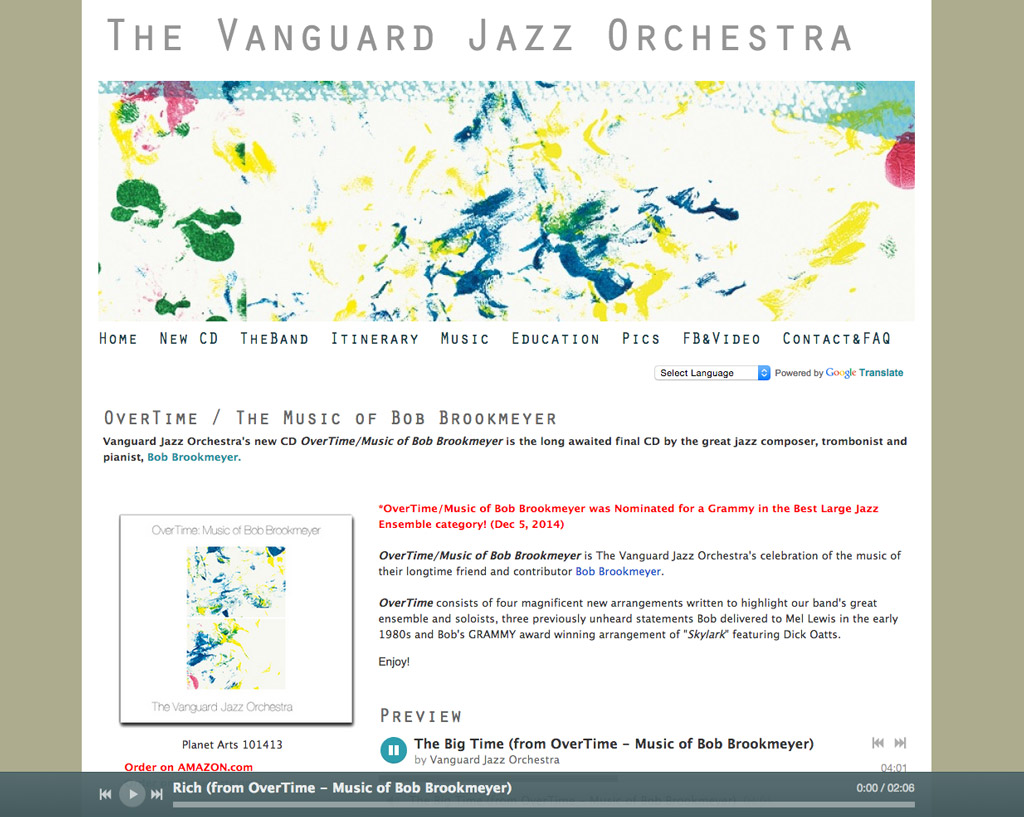 That page gives tons of context for the album. They explain the album's concept, who played on it, and include video interviews about the album, as well as photos from recording sessions. Really nicely done guys, we’ll be rooting for you this weekend!

Check out their site at: www.vanguardjazzorchestra.com 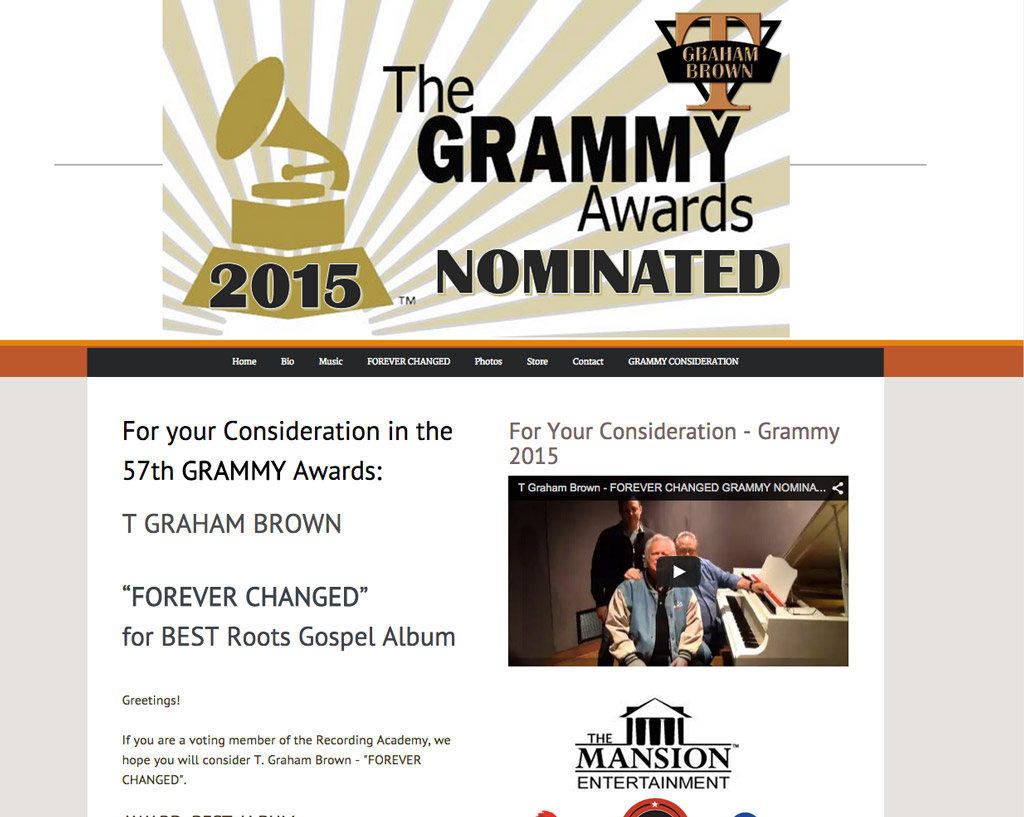 Who: T. Graham Brown
What: Gospel/Soul Singer-Songwriter
Where: Arabi, GA
Why his website rocks: T. Graham Brown was nominated for Best Roots Gospel Album, which is obvious as soon as you land on his site and see the special header image. A great way to put your best foot forward!

We also love that T. Graham Brown created a page just for Grammy voters. It has a full stream of the nominated album, biographical information about himself and the producer, as well as a personal video message from T. Graham Brown. We hope you bring home the gold T. Graham Brown!

Visit his site at www.tgrahambrown.com

For more design inspiration, check out our Website Examples page and the Beautiful Website Templates category of our blog.

Posted by BRENT ALLEN
T: YOUR GOING TO BE IN MY HOMETOWN, PRESTONSBURG, KY., MARCH 21., AT THE MT. ARTS CENTER! I HAVE BEEN YOUR BIGGEST FAN, OVER YOUR CAREER. IT WOULD BE MY "LIFE LONG DREAM", TO SIT IN WITH YOU ON A, COUPLE OF SONGS, I KNOW BY HEART!! I HAVE PLAYED TENOR SAX OVER 30 YEARS, ALSO I'VE CAUGHT YOUR SHOWS AT HAZARD,KY,--MARTIN CO. KY.-- &amp; JENKIN'S,KY. I'VE PLAYED KEYBOARD LAST 10 YEARS IN CHURCH, BUT PLAYED SAX 26 YEARS IN CLUBS, CHECK MY YOUTUBE SITE, WHERE ME AND MY BUDDY PLAYED A XMAS PARTY AT OUR VETERANS HOME. I'M PLAYING SAX ON TWIST'N THE NIGHT AWAY! CHECK MY YOUTUBE SITE, TO SEE IF I'M LEGIT: blackwater2275, or Brent Allen gospel MY FRIEND IS THE EXECUTIVE DIR. OF THE MOUNTAIN ART'S CENTER, IS "KEITH"! PLEASE LET ME KNOW IF YOU COULD MAKE MY WISH COME TRUE. MY PHONE NUMBER: (606) 358- 4815. GOD BLESS YOU AND YOUR WIFE!!!!!!!!!!!!! p.s.: ALL MY FRIENDS ASKED ME TO RUN THIS BY YOU, THEY'LL ALL BE THERE!!!!!!!