Posted by Guest Blogger on Mar 27, 2017 in: Music Marketing & Promotion 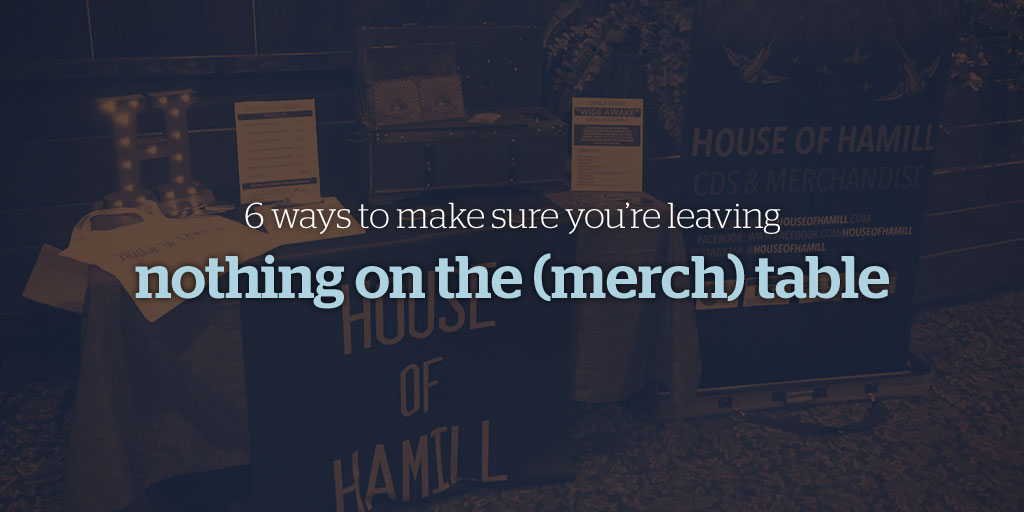 It's 2017! Here we all are in the future, and what do you know - the music industry hasn't collapsed!

Sure, CDs aren't selling the way they used to in stores. Neither is digital music, thanks to the explosion of streaming services. But those of us living the nose-to-the-grindstone, unglamorous life of the touring musician know a secret: people still buy stuff at shows.

The ONLY place I still listen to CDs is in my car. When I'm pumped about a live show, I want to listen to the band's music on my way home. I want to hang a poster over the holes in my drywall. I want to buy a hoodie so my girlfriend has something trendy to "borrow" from me.

When you're on the road, a good night at the merch table can mean the difference between a hotel bed and a van seat. I'm going to walk you through half a dozen ways to make your merch table "pop".

First, though - some basic ground rules.

Your merch area is an extension of your stage

It's part of your band's personality in a room or at a festival, and you should be aware of the message you're sending. If your table is chaotic, and looks like it was thrown together haphazardly, your band will look amateur - and your customers (especially older customers) will feel less comfortable handing you their credit cards.

Speaking of which, it's crucial that you find a way to accept credit cards. Sign up for Square and get a reader. Their app is very intuitive and you will definitely see a difference in sales. Many people are reluctant to part with cash at a bar, but it's not because they don't want your stuff - they just need drink money!

Also - the place you're told to sell your merch might not actually be the best place in the venue. Make sure it's a convenient spot for people to linger, not directly in front of a blasting speaker or blocking access to a bathroom.

Finally - never forget to mention your merch table from the stage, slowly and clearly, and point to where it is while you're speaking. If you can think of a great joke to make it seem less like a commercial, great - but don't feel awkward about selling your stuff. Every single person in a music venue understands that you're there to make fans, and if you're cool about it, nobody will think less of you. I promise.

“If your merch table is hard to see, it's hard to find (and easy to ignore)”

This seems obvious, which is why I'm starting with it. If your merch table is hard to see, it's hard to find (and easy to ignore). As anyone who has ever tried to take a selfie at a rock show knows, music venues are DARK.

Sometimes there's a dedicated area for you to set up your stuff, and sometimes that area even has a light - but it's rarely enough. Pick up a cheap (preferably waterproof) strip of LED lights that you can lay across the front of your table or hang across the wall behind you. While you're at it, grab a handful of battery-powered lights like these, because you will definitely find yourself at a venue or festival where a power outlet isn't conveniently available.

If you want to go the extra mile, consider other light sources that might add to the ambience (funky lamps, cheap old TVs playing classic monster movies, whatever). Light is inviting and friendly, and it makes your merch look great. Just keep in mind that some lights are also fragile, so don't bring anything on the road without a safe way to transport it.

While we're on the subject of visibility, a banner with your band's name and logo can really grab the eye, and can tell prospective buyers a lot about you before they even approach the table.

For years my band carried a vinyl banner that we would tenuously duct tape to the wall behind the table, until one day we discovered the magic of collapsible pop-up-banners, and we've never looked back. They look amazing, they can sit basically anywhere, they take 30 seconds to set up, and you can get an 8'x3' full-color pop-up banner for under $200 that collapses into a tiny little case you can toss in your trunk.

Our banner has our band's name, artwork from our latest album, a couple of press quotes and a bunch of credit card logos, and it's visible from a hundred yards away. On our last tour, we even printed four of them with black and white tree silhouettes and set them up onstage, which instantly re-branded every stage to match our album art, website and merch area. You won't regret it - trust me on this one.

This is very much related to the first point, but it's worth mentioning on its own: your merch table is a storefront, and you will have a better chance of connecting to your fans (and moving some merch) if you understand the demographics and tastes of the people you're trying to attract, and decorate accordingly.

If your tour or album art has a strong color theme or visual motif, extend it to your merch table. It'll look great, and it'll feel comfortable and familiar to your fans.

Maybe this means buying a color-specific tablecloth or lights, or painting and distressing some wooden CD displays. Don't be afraid to have a few props on the table that aren't for sale (as long as things don't get too cluttered). If your table reinforces your branding, it'll make an impression that sticks with people even if they don't buy anything.

“Don't get too clever with colors and fonts here”

Rock clubs are loud. People are awkward. Social anxiety is a thing. The more questions you can answer without having to shout over the house music, the better.

Make a clear, legible price list (no weird death metal fonts - there's a time and place, and this isn't it). If you have any special packages, describe them clearly and succinctly. If you're feeling really ambitious, you can also make a sheet with a short description of your album(s).

Don't get too clever with colors and fonts here - remember, red lights make red ink invisible, and people don't always wear their glasses to a rock show. Black ink on white paper or vice-versa is best, and make the fonts big, bold and beautiful. Oh, and if you're lucky enough to be touring in a foreign country, get someone local who you trust to translate your signs, and reprint them.

...which is my way of saying, try to have something free for fans at your table. You can get a roll of stickers, some custom guitar picks or a few dozen buttons for next to nothing.

Telling people to stop by and get some free stuff is a great way to mention your merch table naturally from the stage. I got my band's logo printed on the gauge of guitar picks I use onstage, which means even if I forget all of mine in yesterday's pants I'm never scrambling for a pick before a set. Win win.

“Beware the dreaded "Don't worry about it, I'll just look it up online." They won't.”

This is crucial for a number of reasons. First of all, people don't want to have to spend too long at your table. The more you can streamline the process, the better!

If you've got multiple t-shirt designs in multiple sizes, colors or styles, you need a simple and efficient system behind the table so that it's obvious what you've got and where to find it. If you can, count in a specific number of each item before the show starts so it's easy to take inventory at the end of the night. Many venues take a cut of merch sales, and they'll expect you to have your act together when they come to settle up.

When it comes to "soft goods" (clothing), it's vital that you don't just have a big bin filled with dozens of mismatched shirts. Part of sales is making things convenient for your buyer, but it's also important to remember that your customers don't want to feel like they're inconveniencing YOU, or the other people in line. If you can't find a size or style quickly, you'll often lose the sale. Beware the dreaded "Don't worry about it, I'll just look it up online." They won't.

“Good volunteers are worth their weight in gold.”

It's not always possible for you to look after the merch yourself, and that means one of three things: either the venue will have someone do it (usually for a cut); you'll have someone on your team to take care of it (like a road manager); or most likely, that you'll depend on willing volunteers.

Having a dedicated merch person is great, but it's not usually affordable for a band starting out. Venue employees don't know your band, don't know your music, and generally don't care how much you sell.

Good volunteers are worth their weight in gold. Nobody is a better evangelist for your band than an enthusiastic fan. They know your songs, know where you're playing next, and can answer questions that a venue employee can't.

Reach out on Facebook or Twitter before you hit the road. Finding a trusted, friendly, SOBER merch volunteer or two in any given market is amazingly beneficial - and you should always make sure they feel appreciated. Put them on the guest list. Thank them by name from the stage. Make sure they get a picture with the whole band. Buy them a drink… after the show. If they do a great job, always make sure you get their number and email address so you can reach out again next time you're in town.

Some of this stuff may seem like common sense, but there's a lot to think about when you're planning a tour, and it's easy to overlook something.

Remember: every CD you sell could mean five more tickets sold the next time you're in town, and your CDs don't do anything for your career sitting in your garage. With a little bit of effort, you can make every show a success, and an awesome merch table will leave a great impression on fans and venues alike.

Be safe out there!

Bandzoogle member Brian Buchanan is a multi-instrumentalist, singer and songwriter living in Philadelphia. His band "Enter The Haggis" has been touring internationally for almost two decades, and has been featured on A&E Breakfast With The Arts and a nationally syndicated PBS Concert Special. He and his fiancee Rose Baldino just released their debut album as House of Hamill

Posted by gomez
I must say A round of applause for your article topic.Thanks Again. Really Cool.