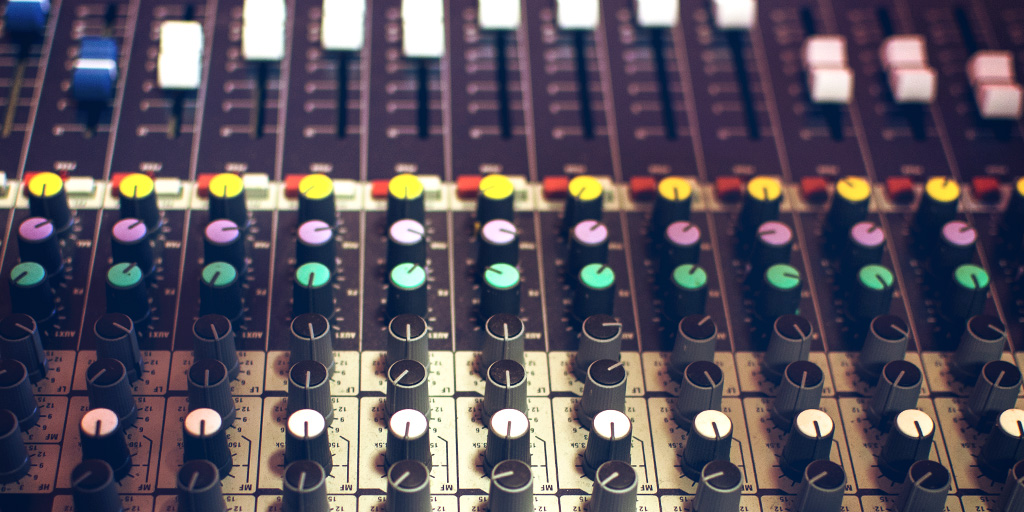 Very few artists today — from pop to hip-hop to rock — leave their vocals raw and untouched. With the rise of electronic processing and manipulation in the modern mixing landscape, the original vocal track shares space with layers upon layers of effects.

Regardless of your genre of music, the key to achieving this unique sound is finding the right balance through creative applications of panning, EQ, stereo spreading, compressing, and other methods. Soundfly’s new online course, Faders Up: Modern Mix Techniques, is built around utilizing these methods to attain professional, contemporary-sounding mixes — and we wanted to share some info from the course to show how easy it can be! Let’s take a look at how today’s most innovative artists blend layers of their voice, and how you, too, can create those same effects.

In this chilling electronic piano ballad, James Blake brilliantly mixes three layers of his voice across the stereo spectrum.

The main, center vocal sits in mono with a small echo of reverb; otherwise, it’s largely clear and untouched. In the right ear, we have that same vocal, but it’s under an ocean of reverb. He keeps this mix for the majority of the song, allowing the lead vocal to hit us clearly in the center, but not without a healthy dose of reverb in the right ear. During several moments in the song, he introduces another layer of his voice, but this time it’s in the left ear. Instead of more reverb, this left-ear vocal layer is saturated to its core.

When all three play at once, we get an amalgam of raw vocals, reverb-blurred vocals, and distorted vocals. By using the entirety of the stereo field, Blake is able to give us a creative blend of vocal effects, all while keeping his main vocal clear enough that we can hear what he’s singing.

How to do it yourself: Take a dry vocal stem. Duplicate it twice. Leave one layer in mono without any effects (other than necessary EQ and compression). Put the first duplicate in the right ear, and the second duplicate in the left ear.

For the right and left vocals, experiment with different effects to achieve a full-stereo combination of effects. But as you experiment, be sure to keep your original mono vocal the distinct and decisive voice in the mix.

2. Use heavy effects in moderation

As you can hear in Radiohead’s “The Present Tense,” Thom Yorke’s voice is dry, without any real effects. You can hear his melodies and lyrics perfectly. But throughout the song, in the right ear, there’s an extreme amount of delay on a duplicate layer of his voice. It’s not even an echo of the melody — it’s just tangled lyrics stumbling over each other with as much delay as one can use without overpowering everything else.

The right ear comes and goes throughout the song. If it were used consistently, it would become overpowering and distracting. But when used sparingly, it gives a beautiful psychedelic undertone of Yorke’s passionate singing.

How to do it yourself: Keep your main vocal stem untouched in mono, and then duplicate it in the right ear. Crank your delay to 10, with the feedback around 80 percent. Use this effect only on small snippets, preferably starting at the beginning of a measure.

If you simply duplicate the vocal and let all that delay run throughout the track, it’s going to be sloppy and distracting. Use it in small moments to complement the lead vocal.

[How to record & process vocals in your home studio]

In the beginning “I’m In It,” Kanye West’s voice is untouched and dry in the center. In the right and left ear, a pitched-down version of his vocal raps along with him. The combined vocals allow West to rap clearly in his signature flow, but the pitched-down layer adds an element of ghostly mystery to the song’s mood.

How to do it yourself: Duplicate a dry mono vocal stem, using your preferred plugin for full stereo vocals, then pitch down that vocal either a fifth or a full octave. By having the pitched-down vocals completely in the left and right ear and not in the center, you give the main vocal room to truly shine, while still retaining a unique layered effect.

Similar to West using a pitched-down version of his voice, FKA twigs pitches her voice up in “Water Me.” All of her vocals have heavy effects; there’s no raw vocal leading the way on this one.

How to do it yourself: Achieving this effect is similar to the approach for Blake's song from our first example. But in this case, in order to keep frequencies from clashing, you’ll need to EQ the reverb. In “Water Me,” the majority of the reverb we hear is high end, above 1K Hz.

While we’ve been primarily focusing on vocal layers that are rhythmically in sync, it’s also common to hear a trail vocal effect, such as in Banks’ “Drowning.”

As she sings each lyric, a pitched-down, stereo-spread duplicate layer of her vocal comes in right after, repeating each line and melody. Notice that the duplicate vocal is mixed to be much softer, so as not to compete with her lead vocal.

How to do it yourself: Duplicate your lead vocal, and push it forward using delay or simply by placing it ahead on the grid. Pitch down the vocal either a fifth or an octave to give it a ghostly, alien effect. Tone down the volume using EQ and reverb, so that it’s not too competitive with the lead.

There’s no limit to what you can do when experimenting with vocal mixing. The main thing we’d recommend is to be conscious of keeping the lead vocal dry enough for listeners to understand the lyrics and melodies. Create a hierarchy in your mix, with a clear lead vocal in mono, and the duplicate layers of effects falling farther down the chain, in terms of where they land on the stereo spectrum and how present they are in the overall mix. Find the balance that works for you.

Want to learn techniques directly from top sound engineers who’ve worked with Beyoncé, D’Angelo, Solange, Sia, Mark Ronson, the New York Philharmonic, Dirty Projectors, and more? Soundfly’s new online course, Faders Up: Modern Mix Techniques covers all the fundamentals of mixing, from referencing and levels to automation and compression. With six weeks of detailed feedback on your mixes from an expert Soundfly Mentor who works in the field, you’re guaranteed to actually get the support you need to meet your goals.

Click here to preview the course for free. If you’d like to enroll in the upcoming session starting on January 9, 2018, be sure to use the promo code BANDZOOGLE at checkout to get 25% off (that’s $125!).